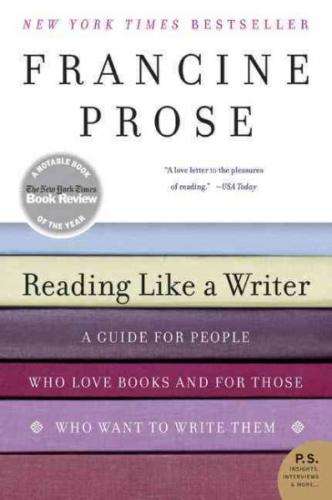 Long before there were creative writing workshops and degrees, how did aspiring writers learn to write? By reading the work of their predecessors and contemporaries, says Francine Prose.

As she takes us on a guided tour of the tools and the tricks of the masters—Dostoyevsky, Flaubert, Kafka, Austen, Dickens, Woolf, Chekhov—Prose discovers why these writers endure. She takes pleasure in the signature elements of such outsatanding writers as Philip Roth, Isaac Babel, John Le Carré, James Joyce, and Katherine Mansfield. Throughout, she cautions readers to slow down and pay attention to words, the raw material out of which literature is crafted. Written with passion, humor, and wisdom, Reading Like a Writer will inspire readers to return to literature with a fresh eye and an eager heart.

Francine Prose is the author of twenty-one works of fiction including, the highly acclaimed Mister Monkey; the New York Times bestseller Lovers at the Chameleon Club, Paris 1932; A Changed Man, which won the Dayton Literary Peace Prize; and Blue Angel, which was a finalist for the National Book Award. Her works of nonfiction include the highly praised Anne Frank: The Book, The Life, The Afterlife, and the New York Times bestseller Reading Like a Writer, which has become a classic. The recipient of numerous grants and honors, including a Guggenheim and a Fulbright, a Director’s Fellow at the Center for Scholars and Writers at the New York Public Library, Prose is a former president of PEN American Center, and a member of the American Academy of Arts and Letters and the American Academy of Arts and Sciences. She is a Distinguished Writer in Residence at Bard College.

“a jewel of a companion…engrossing...and...daringly insightful.” — Los Angeles Times

“The passages are…subtle and brilliant in their capture of human complexity…Prose is…a skilled…analyst of what makes them so.” — San Francisco Chronicle

“Reading Like A Writer is different from the rest of the pack…[Prose’s] wise book serves as an ispirational reminder.” — Washington Times

“Sensible, valuable and highly readable, Reading Like a Writer deserves perusal — both in and out of the classroom.” — Kansas City Star

“An absolutely necessary addition to the personal library of anyone who is a writer or dreams of writing.” — National Public Radio

“Makes a case for the rewards of reading.” — Fort Lauderdale Sun Sentinel

“Prose knows when to be funny, how to wield examples, and when to stop.” — More magazine

“Prose’s guide to reading and writing belongs on every writer’s bookshelf alongside E.M. Forster’s Aspects of the Novel.” — Publishers Weekly (starred review)