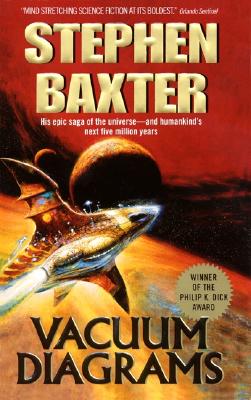 This is book number 5 in the The Xeelee Sequence series.

"And everywhere the Humans went, they found life ..."

This dazzling future history, winner of the 2000 Philip K. Dick Award, is the most ambitious and exciting since Asimov's classic Foundation saga. It tells the story of Humankind -- all the way to the end of the Universe itself.

Here, in luminous and vivid narratives spanning five million years, are the first Poole wormholes spanning the solar system; the conquest of Human planets by Squeem; GUTships that outrace light; the back-time invasion of the Qax: the mystery and legacy of the Xeelee, and their artifacts as large as small galaxies; photino birds and Dark Matter; and the Ring, where Ghost, Human, and Xeelee contemplate the awesome end of Time.

Stephen Baxter is the most acclaimed and accomplished of a brilliant new generation of authors who are expanding the vision of science fiction and taking itto a new golden age.

Stephen Baxter is an acclaimed, multiple-award-winning author whose many books include the Xeelee Sequence series, the Time Odyssey trilogy (written with Arthur C. Clarke), and The Time Ships, a sequel to H. G. Wells's classic The Time Machine. He lives in England.