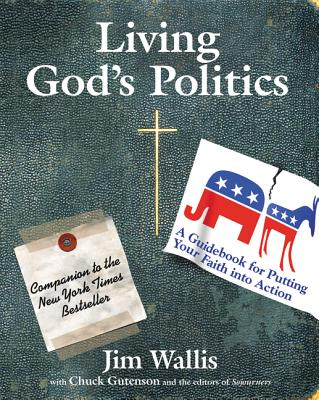 After fifteen weeks on the New York Times Bestseller list, God's Politics not only changed the conversation about faith and politics in this country, it began a movement. All across the country, wherever Jim Wallis spoke, people were frustrated by tax cuts and budgets that widened the gap between rich and poor, aggravated by the government's lack of response to natural disasters, wearied of misinformation and the ongoing war in the Middle East, and exasperated by the impractical political rhetoric about sexual abstinence in lieu of policies that would strengthen more broadly family values and community health.

Folks began asking what they could do to promote peace, economic justice, racial equality, and the sanctity of life. They wanted to know how they could influence government policies to better reflect their moral values. In response, Wallis and the editors of Sojourners magazine offer Living God's Politics, a reader's guide for putting the lessons of God's Politics into action. Who will change our government's policies to better integrate our values? We're the ones we've been waiting for, and this book offers us the tools and techniques to change the political landscape for the better.

Jim Wallis is the author of the New York Times bestseller God's Politics, which electrified Americans disenchanted with how the Right had co-opted all talk about integrating religious values into our politics by offering an alternative voice. Wallis is a leading figure at the crossroads of religion and politics in America today, the author of eight books, and the founder of Sojourners, a global faith and justice network. He is a public theologian, an internationally renowned speaker and preacher, a faith-based activist, husband, and father to two young boys, and a Little League baseball coach.