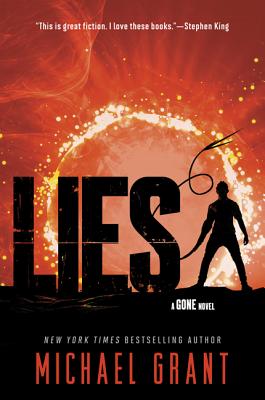 This is book number 3 in the Gone series.

It's been seven months since all the adults disappeared. Gone.

It happens in one night. A girl who died now walks among the living; Zil and the Human Crew set fire to Perdido Beach, and amid the flames and smoke, Sam sees the figure of the boy he fears the most: Drake. But Drake is dead. Sam and Caine defeated him along with the Darkness—or so they thought.

As Perdido Beach burns, battles rage: Astrid against the Town Council; the Human Crew versus the mutants; and Sam against Drake, who is back from the dead and ready to finish where he and Sam left off. And all the while deadly rumors are raging like the fire itself, spread by the prophetess Orsay and her companion, Nerezza. They say that death is a way to escape the FAYZ. Conditions are worse than ever and kids are desperate to get out. But are they desperate enough to believe that death will set them free?

“Disturbing, brilliantly plotted, and boasting a balanced mix of action and scheming.” —ALA Booklist

Michael Grant, author of the Gone series, the Messenger of Fear series, the Magnificent Twelve series, and the Front Lines trilogy, has spent much of his life on the move. Raised in a military family, he attended ten schools in five states, as well as three schools in France. Even as an adult he kept moving, and in fact he became a writer in part because it was one of the few jobs that wouldn’t tie him down. His fondest dream is to spend a year circumnavigating the globe and visiting every continent. Yes, even Antarctica. He lives in California with his wife, Katherine Applegate, with whom he cowrote the wildly popular Animorphs series. You can visit him online at www.themichaelgrant.com and follow him on Twitter @MichaelGrantBks.