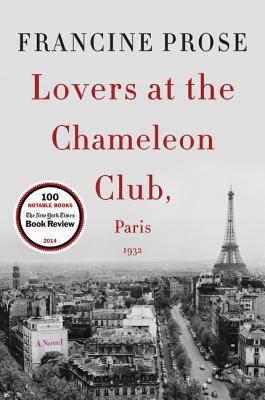 It's been a while since I have read a novel inhabited by such a beguiling group of exotic and wonderfully decadent characters. The setting is 1930's Paris. Change is afoot in Europe. Hitler is stirring things up next door. But life in Paris continues to be a party for those wealthy, titled, or talented enough to be invited to attend. Prose deftly unfolds the biographies of her characters...and I found every one of the storylines mesmerizing. This is fascinating stuff. You can google the Brassai photograph that inspired the author..."Lesbian Couple at Le Monocle, 1932." Then start reading...things will just get more interesting from there. This was a hard one for me to put down.

It's been a while since I have read a novel inhabited by such a beguiling group of exotic and wonderfully decadent characters. The setting is 1930's Paris. Change is afoot in Europe. Hitler is stirring things up next door. But life in Paris continues to be a party for those wealthy, titled, or talented enough to be invited to attend. Prose deftly unfolds the biographies of her characters...and I found every one of the storylines mesmerizing. This is fascinating stuff. You can google the Brassai photograph that inspired the author..."Lesbian Couple at Le Monocle, 1932." Then start reading...things will just get more interesting from there. This was a hard one for me to put down. — From Walt's Picks (page 2)

A richly imagined and stunningly inventive literary masterpiece of love, art, and betrayal, exploring the genesis of evil, the unforeseen consequences of love, and the ultimate unreliability of storytelling itself.

Paris in the 1920s shimmers with excitement, dissipation, and freedom. It is a place of intoxicating ambition, passion, art, and discontent, where louche jazz venues like the Chameleon Club draw expats, artists, libertines, and parvenus looking to indulge their true selves. It is at the Chameleon where the striking Lou Villars, an extraordinary athlete and scandalous cross-dressing lesbian, finds refuge among the club’s loyal denizens, including the rising Hungarian photographer Gabor Tsenyi, the socialite and art patron Baroness Lily de Rossignol; and the caustic American writer Lionel Maine.

As the years pass, their fortunes—and the world itself—evolve. Lou falls desperately in love and finds success as a race car driver. Gabor builds his reputation with startlingly vivid and imaginative photographs, including a haunting portrait of Lou and her lover, which will resonate through all their lives. As the exuberant twenties give way to darker times, Lou experiences another metamorphosis—sparked by tumultuous events—that will warp her earnest desire for love and approval into something far more.

Francine Prose is the author of twenty-one works of fiction including, the highly acclaimed Mister Monkey; the New York Times bestseller Lovers at the Chameleon Club, Paris 1932; A Changed Man, which won the Dayton Literary Peace Prize; and Blue Angel, which was a finalist for the National Book Award. Her works of nonfiction include the highly praised Anne Frank: The Book, The Life, The Afterlife, and the New York Times bestseller Reading Like a Writer, which has become a classic. The recipient of numerous grants and honors, including a Guggenheim and a Fulbright, a Director’s Fellow at the Center for Scholars and Writers at the New York Public Library, Prose is a former president of PEN American Center, and a member of the American Academy of Arts and Letters and the American Academy of Arts and Sciences.  She is a Distinguished Writer in Residence at Bard College.

“A reading experience like none other-a shimmering library of possible truths and forking pathways…Readers of this extraordinary novel become Villars’ co-biographers, piecing through ‘official’ and underground accounts as ample (and as unreliable) as the human library of memory. I was addicted to this book.”
— Karen Russell, author of SWAMPLANDIA

“Prose’s latest book goes further in destroying the concept of a single truth than ‘Rashomon.’ It’s also an uproarious portrait of Paris from the mid-twenties to the Second World War. Prose has always been adept at slaying sacred cows; in this book, she pretty much machine-guns them.”
— Gary Shteyngart, author of LITTLE FAILURE, A Memoir

“An engrossing literary mystery…Refracting the vivid, villainous life of Louisianne Villars through letters, memoirs, and the recreations of a biographer, Prose coaxes into kaleidoscopic view both a tortured human being and bohemian Paris before and during the Nazi occupation… she cleverly exploits the vain, self-serving nature of memory itself.”
— Jennifer Egan, Pulitzer Prize winning author of A VISIT FROM THE GOON SQUAD

“A pitch perfect pastiche that interrogates the meaning of art and the limits of loyalty. With a style that is beautiful, strong, modest and absolutely authoritative Prose directs the light of her immense talent on the horrors of fascism and the puzzling, sometimes punishing nature of love. A great novel.”
— Scott Spencer, author of MAN IN THE WOODS and A SHIP MADE OF PAPER

“Significant writers are rare. A writer like Prose, who is not only significant but capable of writing brilliantly about pretty much anything-from obsessive love to religious ecstasy to life in Paris in the twenties and beyond-is not only rare. She is, essentially, the Hope Diamond of literature.”
— Michael Cunningham

“Brilliant and wicked and funny and right on-never has Europe been done with such savage precision…Every bit funny and appalling, at the end especially, of course. There’s not a French affectation, hypocrisy or depravity left untouched. I love it!”
— Diane Johnson, author of LE MARIAGE and L'AFFAIRE

“Prose is the real chameleon here, blending effortlessly into half a dozen disparate voices…The result is a perfect stunner, the novel-as-a Picasso, or a kaleidoscope-vivid, fractured, and spellbinding…Prose is one of our sharpest critics and our most daring novelists, and this is her best book.”
— Joshua Ferris, author of AND THEN WE CAME TO THE END

“The breadth, nerve and intricacy of Francine Prose’s big new novel should surprise even her most regular readers. A bona fide page turner…”
— The New York Times

“A novel of great reach and power, a portrait of an entire era.”
— The New York Times Book Review

“So dazzlingly does Francine Prose re-create this seamy chapter of mid-century Paris that it’s tempting to think of her as not a novelist but an editor who corralled all these people into a raucous work of history...C’est magnifique!”
— The Washington Post

“A master of the craft delivers a riveting period piece that probes the origins of evil.”
— O Magazine

“A tour de force…The result is fresh, layered and nuanced. It’s historical fiction done right and one of the finest accomplishments of this accomplished author…The novel dazzles. With sure, intelligent narrative and elegant detail, Prose has crafted a story that honors its characters and a pivotal time in history.”
— Miami Herald

“Engrossing...The narrative twists and turns, circles back to add depth to previous scenes, at other times casts doubt on the reliability of a narrator, and occasionally calls into question the entire endeavor of historical fiction.”
— Elle

“The circumstances that foster such unhappiness are always elusive, but they can be explored. That’s the task of a good novel, and Prose has done the job.”
— The Seattle Times

“[E]xcellent novel… With a deft and frequently scathing touch, Prose sends up nearly every literary type imaginable and then some…”
— The San Francisco Chronicle

“Prose’s excellent novel, which treads between lightly mischievous (mocking Henry Miller) and deadly serious (invading Nazis), centers on a fictionalized French Olympic hopeful who spied for the Germans - and was killed by the Resistance in 1944.”
— The San Francisco Chronicle

“Prose exuberantly conjures up the romance of that unstable era…filled with felicitous imagery and sparkling period details.”
— Wall Street Journal

“[A] stunning novel…a provocative exploration of identity and the search for acceptance.”
— BookPage

“Prose’s novel pulses with the heartbeat of real life, brimming with colorful characters as artists (including, notably, Pablo Picasso), petty forgers, Nazis and resistance fighters meet on the page… It is a testament to Prose’s considerable talent that she’s able to execute such an ambitious work so flawlessly.”
— Shelf Awareness

Many sure-footed novelists have tried to embody Paris in its boozy, gender-bending, art-and-outrage pre-occupation golden age of the ‘20s and ‘30s before, but the ever-exceptional Prose succeeds in making the city alive by supplying it with a dissonant, avant-garde chorus of voices…
— Interview Magazine

“An ingenious excursion into the Parisian demimonde.”
— Maureen Corrigan, NPR.org

“The novel skillfully portrays the headiness of Parisian cafes, where artists and writers came together to talk and cadge free drinks, and the terror of the Nazi Occupation… Prose deftly demonstrates with a wink the self-seeking nature of memory and the way we portray our past.”
— Publishers Weekly

“A rich portrait of a difficult age”
— The Milwaukee Journal-Sentinel

“Lovers at the Chameleon Club, Paris 1932 will be many things to many people–history, mystery, chronicle, commentary–but above all, it’s a generous book that offers complete submergence in a world constructed for readers’ enjoyment. It’s a dark and complicated place, this lamp-lit prewar Paris, but a remarkably entertaining one.”
— Kirkus Reviews

“Prose does an impressive job crafting a plot in which each version of the story takes on its own dimensions and echoes - and the biggest question may be just which one of those narrators is the most outrageously unreliable.”
— The Tampa Bay Times

“Francine Prose, in a testament to her talents, has managed to create a wartime saga that is both original and epic.”
— The Daily Beast

“LOVERS AT THE CHAMELEON CLUB, PARIS 1932 is a remarkable work of fiction that feels completely true. Richly atmospheric and utterly engrossing, it is not to be missed.”
— BookPage

“At its best moments, the reader almost becomes another character in the novel, searching for meaning amid the menace and beauty of wartime Paris, surrounded by the city’s many conflicting truths.”
— The Chicago Tribune

“LOVERS AT THE CHAMELEON CLUB, PARIS 1932 paints an unforgettable portrait of Paris between the wars, a time and place that holds endless fascination for readers.”
— Bookreporter.com

“LOVERS AT THE CHAMELEON CLUB is a teeming social portrait, told through several peculiar voices - Lou’s is not one of them - and made real by astonishingly authentic details… Prose is versatile and fluid.”
— The Asheville Citizen-Times

“The wonder of Ms. Prose’s terrific historical novel is how she takes inspiration from a work of visual art and builds, not just one story, not just one voice, but a kaleidoscope of voices and angles about individuals whose lives intersect at a particular time and place.”
— BookBrowse

“Sexy, illicit … the best stories come to us many times over, repeated until even their true parts bear the qualities of fiction. They’re also the ones we can’t possibly know all of. This powerful, perceptive book offers these truths, and-even better-a great story to shroud them.”
— Philadelphia Inquirer