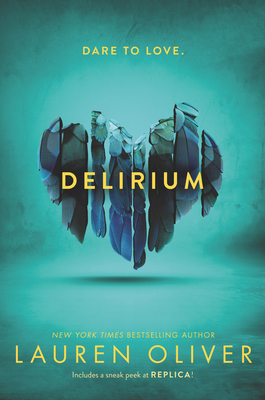 This is book number 1 in the Delirium Trilogy series.

“Not just another dystopian novel, Delirium presents a world where love is looked at as a disease and citizens are subjected to a procedure to relieve them of its burden at age 18. But if you can't live with love, is it really worth it to live without it? This is a very touching and thought-provoking novel.”
— Vicki Erwin, Main Street Books, St.Charles, MO

The first book in Lauren Oliver’s New York Times bestselling trilogy about forbidden love, revolution, and the power to choose.

In an alternate United States, love has been declared a dangerous disease, and the government forces everyone who reaches eighteen to have a procedure called the Cure. Living with her aunt, uncle, and cousins in Portland, Maine, Lena Haloway is very much looking forward to being cured and living a safe, predictable life. She watched love destroy her mother and isn't about to make the same mistake.

But with ninety-five days left until her treatment, Lena meets enigmatic Alex, a boy from the Wilds who lives under the government's radar. What will happen if they do the unthinkable and fall in love?

“In [Oliver’s] dystopian America, love has been outlawed as the life-threatening source of all discord. Lena’s gradual awakening is set against a convincing backdrop of totalitarian horror. The abrupt ending leaves enough unanswered questions to set breathless readers up for volume two of this trilogy.” — Kirkus Reviews (starred review)

“Strong characters, a vivid portrait of the lives of teens in a repressive society, and nagging questions that can be applied to our world today make this book especially compelling and discussable.” — School Library Journal (starred review)

“Oliver’s follow-up to her smash debut, Before I Fall (2010), is another deft blend of realism and fantasy...the book never loses its A Clockwork Orange-style bite regarding safety versus choice.” — Booklist

“In a thick climate of fear, Oliver spins out a suspenseful story of awakening and resistance with true love at its core.” — The Horn Book

Praise for Before I Fall: “Samantha’s attempts to save her life and right the wrongs she has caused are precisely what will draw readers into this complex story and keep them turning pages until Sam succeeds in living her last day the right way.” — Voice of Youth Advocates (VOYA) (Starred Review)

Praise for Before I Fall: “Oliver, in a pitch-perfect teen voice, explores the power we have to affect the people around us in this intensely believable first novel...This is a compelling book with a powerful message and should not be missed.” — ALA Booklist

Praise for Before I Fall: “This story races forward, twisting in a new direction every few pages, its characters spinning my emotions from affection to frustration, anger to compassion. You’ll have no choice but to tear through this book!” — Jay Asher, author of the New York Times bestseller Thirteen Reasons Why

Praise for Before I Fall: “Before I Fall is smart, complex, and heartbreakingly beautiful. Lauren Oliver has written an extraordinary debut novel about what it means to live—and die.” — Carolyn Mackler, author of Tangled and The Earth, My Butt, and Other Big Round Things, a Printz Honor book