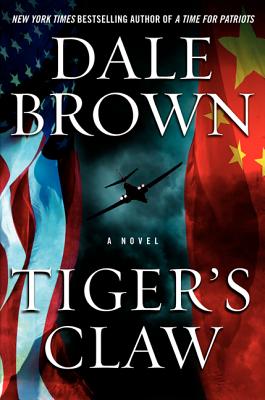 By Dale Brown
Email or call for price
Hard to Find

This is book number 1 in the Brad McLanahan series.

Former Air Force captain and New York Times bestselling author Dale Brown is an acknowledged master when it comes to bringing military action to breathtaking life and he has received glowing accolades since his debut publication, Flight of the Old Dog.

Tiger’s Claw proves once again that every rave has been well deserved. Set in the near future, Tiger’s Claw imagines a scenario in which tensions escalate between an economically powerful China and a United States weakened by a massive economic downfall, bringing the two superpowers to the brink of total destruction. Brown’s popular protagonist, retired Air Force lieutenant-general Patrick McLanahan (of A Time for Patriots, Rogue Forces, and other Brown bestsellers), is back with his son Brad McLanahan and they’re preparing for the impending apocalyptic clash of men and military technology.

The incomparable Dale Brown scores again with a frighteningly possible story of war and global politics that’s ideal for fans of Vince Flynn and Brad Thor.