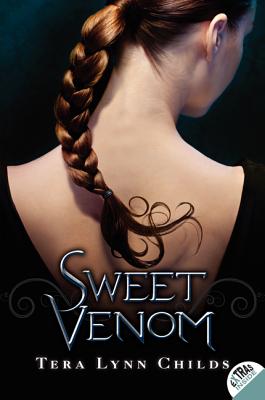 This is book number 1 in the Sweet Venom series.

Three teenage descendants of Medusa, the once-beautiful Gorgon maligned in myth, must reunite and embrace their fates.

Grace just moved to San Francisco and is excited to start over at a new school. The change is full of fresh possibilities, but it's also a tiny bit scary. It gets scarier when a minotaur walks in the door. And even more shocking when a girl who looks just like her shows up to fight the monster.

Gretchen is tired of monsters pulling her out into the wee hours, but what can she do? Sending the minotaur back to his bleak home is just another notch on her combat belt. She never expected to run into this girl who could be her double, though.

Greer has her life pretty well put together, thank you very much. But that all tilts sideways when two girls who look eerily like her appear on her doorstep and claim they're triplets, supernatural descendants of some hideous creature from Greek myth, destined to spend their lives hunting monsters. . . .

Tera Lynn Childs is the award-winning author of several books for teens, including the first two books in the Sweet Venom series, the mermaid romances Forgive My Fins, Fins Are Forever, and Just for Fins, as well as another mythology-inspired series, including Oh. My. Gods. and Goddess Boot Camp. Although Tera always dreamed of discovering a secret twin (or triplet), she is sad to report she remains an only child.