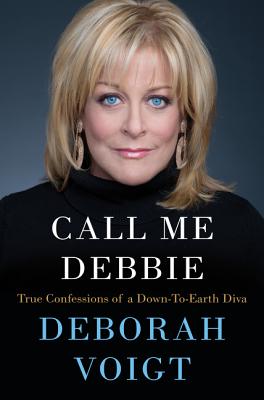 By Deborah Voigt
Email or call for price
Hard to Find

Call Me Debbie is one of the most electrifying performances of Deborah Voigt’s life. The brilliantly gifted opera soprano takes us behind the velvet curtains to tell her compelling story—a tale of success, addiction, music, and faith as dramatic as any role she has performed. For the first time, she talks about the events that led to her dangerous gastric bypass surgery in 2004 and its shocking aftermath: her substantial weight loss coupled with the “cross addiction” that led to severe alcoholism, frightening all-night blackouts, and suicide attempts. Ultimately, Voigt emerged from the darkness to achieve complete sobriety, thanks to a twelve-step program and a recommitment to her Christian faith.

Colored by hilarious anecdotes and juicy gossip that illuminate what really goes on backstage, Voigt paints diverting portraits of the artists with whom she’s worked, her most memorable moments onstage, and her secrets to great singing. She also offers fascinating insight into the roles she’s played and the characters she loves, including Strauss’s Ariadne and Salome, Puccini’s Minnie, and Wagner’s Sieglinde, Isolde, and Brünnhilde, sharing her intense preparation for playing them.

Filled with eight pages of color photos, Call Me Debbie is an inspirational story that offers a unique look into the life of a modern artist and a remarkable woman.

Deborah Voigt is one of the world’s leading dramatic sopranos, internationally revered for her performances in the operas of Richard Wagner and Richard Strauss. She has also portrayed some of the iconic heroines in Italian opera to great acclaim. An active recitalist and performer of Broadway standards and popular songs, Voigt appears regularly, as both performer and host, in the Metropolitan Opera’s The Met: Live in HD series. She is also co-creator of Voigt Lessons, a one-woman show she developed with award-winning playwright Terrence McNally and director Francesca Zambello.

“’Call Me Debbie’ is quite a page turner.”
— Buffalo News

“…a startlingly frank look at the life of one of her generation’s most prominent operatic stars.”
— Lisa Ko, author of The Leavers