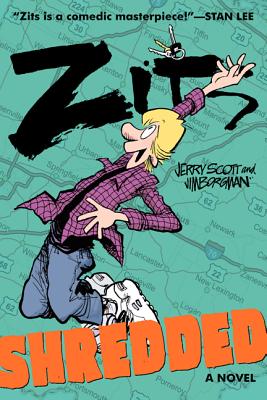 This is book number 2 in the Zits series.

Zits jumps from the comics page to the bookshelf, and Zits: Shredded is perfect for fans of James Patterson's Homeroom Diaries as well as the Zits comic strip!

Jeremy Duncan and his friends Hector and Pierce are hitting the road! That is, if they can squeeze enough french fries to get their newly veggie oil–powered van to Dog Tired Records in Sheboygan, Wisconsin. It's road trip time!

Featuring black-and-white illustrations on every page, Zits: Shredded is based on the hit syndicated comic strip.

Jerry Scott has been a professional cartoonist (aka getting paid to do a comic strip) for almost thirty years, and has been the corecipient of the National Cartoonists Society's Best Comic Strip of the Year honor four times. Sweet! In 1997 (the nineties rock!), and along with the artistic genius of Jim Borgman, Zits the comic strip was born. Jerry is a total overachiever, the recipient of many prestigious awards, which are too numerous and we're too lazy to list—just trust us, he's awesome. He's currently livin' the dream in California with his family.

Jim Borgman has been a cartoonist since kindergarten. An overachiever like Jerry, he has been voted the Best Editorial Cartoonist in America five times (whoa!), been the corecipient (with Jerry) of the Best Comic Strip of the Year Award three times, and he's won most of the top cartooning awards ever presented. Jim's cartoons have hung in some pretty serious places, like the Smithsonian, the National Archives, and various presidential libraries—and above the president of the United States' personal toilet (okay, that one's pretty cool). Jim lives in Colorado with his family.

“Zits is plugged in and ready to rock!” — Lincoln Peirce, author of the New York Times bestselling Big Nate series

“An engaging and fast read. A great recommendation for kids who have graduated from “Diary of a Wimpy Kid.” — School Library Journal

“This is crazy fun all around, with just the right degree of seriousness to anchor the levity. Fans of Zits can rejoice in this new direction.” — Bulletin of the Center for Children’s Books

“[A] hilarious window into the world of adolescent males. Scott and Borgman hit all the right notes. ” — Shelf Awareness

“Even more hilarious [than] Zits: Chillax (2013)...A delectable mix of first-person narrative and, on almost every page, drawings with punch lines and additional dialogue.” — Booklist