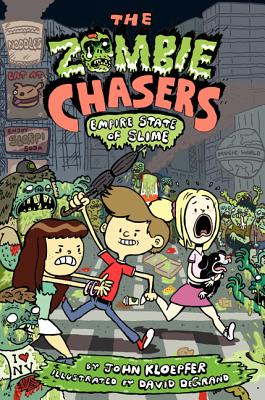 This is book number 4 in the Zombie Chasers series.

Look out! Zombies have taken Manhattan!

With hilarious black-and-white illustrations by David DeGrand, this story is rife with high-action adventure and sidesplitting humor that will leave readers moaning for the next hilarious, stomach-churning addition.

Six months after Zack Clarke, his sister, Zoe, and pals Rice, Ozzie, and Madison saved the country from brain-gobbling ghouls, life is finally heading back to normal. But while the kids are busy exploring the Big Apple's sites on a class trip to New York City, things go from sublime to slime when millions of people suddenly rezombify!

The Zombie Chasers are back on undead duty, but can they escape the crowded city streets and find a new cure, or is Z-Day here to stay?

John Kloepfer is the author of the popular Monsters Unleashed and Zombie Chasers series, as well as the out-of-this-world alien trilogy Galaxy’s Most Wanted. He lives in Los Angeles with his wife, Jenny, and their dog, Doozy.

David DeGrand has been drawing cartoons since he was a kid. When he's not drawing goofy pictures of gross stuff, he plays video games, watches old cartoons and weird movies, and collects toys and books. His biggest goal is to create something his son will find cool someday. He lives with his wife and family in Texas.

Praise for the The Zombie Chasers: “Kloepfer’s first is a Zombieland for the middle-school set: funny, off-color and extremely gross. A great pick for the child who thought Diary of a Wimpy Kid just needed more motile corpses.”
— Kirkus Reviews

Praise for The Zombie Chasers #2: Undead Ahead: “Written with tongue firmly in cheek-and other body parts all over the landscape-this book will appeal to reluctant readers, particularly middle school boys.”
— School Library Journal

Praise for The Zombie Chasers #3: Sludgment Day: “Fans of Garbage Pail Kid-style gross-outs will have a ball as Zack and his buddies take down “a butt-load of zombies.”
— ALA Booklist