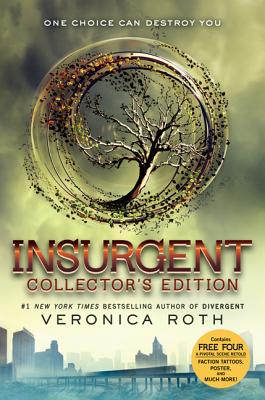 This is book number 2 in the Divergent Series series.

A hit with both teen and adult readers, Insurgent is the action-packed, emotional adventure that inspired the major motion picture starring Shailene Woodley, Theo James, Ansel Elgort, and Octavia Spencer.

Every choice has consequences, and as unrest surges in the factions all around her, Tris Prior must continue trying to save those she loves—and herself—while grappling with haunting questions of grief and forgiveness, identity and loyalty, politics and love.

Tris's initiation day should have been marked by celebration and victory with her chosen faction; instead, the day ended with unspeakable horrors. War now looms as conflict between the factions and their ideologies grows. And in times of war, sides must be chosen, secrets will emerge, and choices will become even more irrevocable—and even more powerful.

Transformed by her own decisions but also by haunting grief and guilt, radical new discoveries, and shifting relationships, Tris must fully embrace her Divergence, even if she does not know what she may lose by doing so.

And don't miss The Fates Divide, Veronica Roth's powerful sequel to the bestselling Carve the Mark!

Veronica Roth is the #1 New York Times bestselling author of Divergent, Insurgent, Allegiant, Four: A Divergent Collection, and Carve the Mark. Ms. Roth and her husband live in Chicago. You can visit her online at www.veronicarothbooks.com.

“The next big thing.” — Rolling Stone

“Roth knows how to write. The novel’s love story, intricate plot, and unforgettable setting work in concert to deliver a novel that will rivet fans of the first book.” — Publishers Weekly

“In this addictive sequel to the acclaimed Divergent,a bleak post-apocalyptic Chicago collapses into all-out civil war. Another spectacular cliffhanger. Anyone who read the first book was dying for this one months ago; they’ll hardly be able to wait for the concluding volume.” — Kirkus Reviews

“Insurgent explores several critical themes, including the importance of family and the crippling power of grief at its loss. A very good read.” — School Library Journal