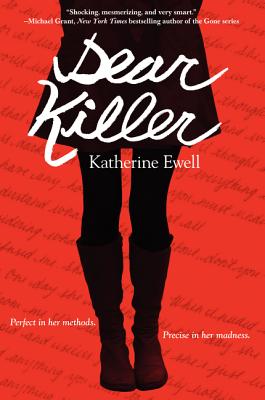 A YA debut featuring a teenage serial killer who learned the trade from her violent mother? Yes, please! I couldn't get enough of this vicious little valentine. Kit is an odd heroine to admire--nihilist, contract killer, high-schooler, but I was rooting for her just the same. I have no idea what Katherine Ewell will dream up next, but I am looking forward to it.

Full of "can't look away" moments, Dear Killer is a psychological thriller perfect for fans of gritty realistic fiction such as Dan Wells's I Am Not a Serial Killer and Jay Asher's Thirteen Reasons Why, as well as television's Dexter.

Rule One—Nothing is right, nothing is wrong. Kit looks like your average seventeen-year-old high school student, but she has a secret—she's London's notorious "Perfect Killer." She chooses who to murder based on letters left in a secret mailbox, and she's good—no, perfect—at what she does.

Her moral nihilism—the fact that she doesn't believe in right and wrong—makes being a serial killer a whole lot easier . . . until she breaks her own rules by befriending someone she's supposed to murder, as well as the detective in charge of the Perfect Killer case.

Katherine Ewell wrote Dear Killer when she was seventeen years old. She was one of fifty finalists out of 5,000 entries in the 2011 Amazon Breakthrough Novel Contest and has attended the invitational Iowa Young Writers' Studio. In addition, she has the distinction of being named a California Arts Scholar and has been awarded the California Governor's Medallion for artistically talented youth. Dear Killer is her first novel.

“Ewell’s narrative presents a beautifully nuanced and entirely believable portrait of a young woman slowly cracking as she finds herself applying the consequences of her amorality to those she has befriended.”
— ALA Booklist

“With thoughtful discussions on philosophy and human nature, as well as satisfyingly detailed and gory descriptions of murders, readers will find plenty to savor and discuss.”
— ALA Booklist

“Underneath the dark sensationalism thus lurks a complex framing of moral questions that thoughtful teens will want to grapple with.”
— Bulletin of the Center for Children’s Books

“This unusual and absorbing debut looks at a serial killer through the eyes of the killer herself.”
— Kirkus Reviews