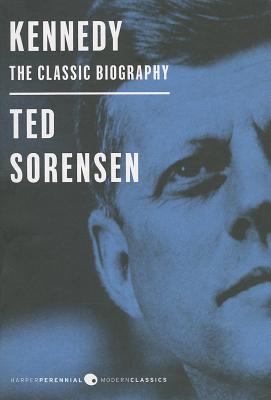 “A brilliant and essential document about the man, the President, and his times. In all the millions of words which have been written about the martyred President, this book must remain unique. . . . It is John F. Kennedy’s life, his personality, his thinking which informed his action and that action itself described with honest and candor which illuminate and enliven the crowded pages of this book. Sorensen has managed to portray Kennedy in realistic human terms and not as the hero of a myth. . . . It is the richness of detail, anecdotes, incidents, conversations, descriptions rather than any gossip or startling revelations which gives the book its compelling readability.”   — Los Angeles Times

The classic, intimate, and #1 national bestselling biography of JFK by his great advisor Ted Sorensen.

In January 1953, freshman senator John F. Kennedy of Massachusetts hired a twenty-four-year-old from Nebraska as his Number Two legislative assistant—on a trial basis. Despite the differences in their backgrounds, in the eleven years that followed Ted Sorensen became known as Kennedy's intellectual blood bank, top policy aide, and alter ego.

Sorensen knew Kennedy the man, the senator, the candidate, and the president as no other associate did. From his role as a legislative assistant to Kennedy's death in 1963, Sorensen was with him during the key crises and turning points—including the spectacular race for the vice presidency at the 1956 convention, the launching of Kennedy's presidential candidacy, the TV debates with Nixon, and election night at Hyannis Port. The first appointment made by the new president was to name Ted Sorensen his Special Counsel.

In Kennedy, Sorensen recounts failures as well as successes with surprising candor and objectivity. He reveals Kennedy's errors on the Bay of Pigs, and his attitudes toward the press, Congress, and the Joint Chiefs of Staff. Sorensen saw firsthand Kennedy's actions in the Cuban missile crisis, and the evolution of his beliefs on civil rights and arms control. First published in 1965 and reissued here with a new preface, Kennedy is an intimate biography of an extraordinary man, and one of the most important historical accounts of the twentieth century.

Ted Sorensen was born in Lincoln, Nebraska, and after law school moved to Washington, D.C., where he would ultimately work for John F. Kennedy. He left the White House soon after JFK's death, and in 1966 joined a New York City law firm, where, as a prominent international lawyer, he advised governments, multinational organizations, and major corporations around the world. He is the author of the New York Times bestseller Counselor: A Life at the Edge of History. Sorensen remained active in political and international issues until his death in 2010.

“Sorensen was so close to his chief cerebrally that this book . . . is the nearest we will have to the memoirs Kennedy intended to write himself.” —  New York Times Book Review

“Thrilling. . . . Crammed with important detail . . . much of which had not been previously known. . . . It is a more revealing book than if President Kennedy had written it himself.” — The Christian Science Monitor

“The authority of the true alter ego. . . . One feels that Sorensen’s Kennedy is a highly substitute for the book Kennedy was going to write—and possibly more candid and accurate than anything Kennedy might have written, with or withour his help, as an ex-President.” — The New Yorker