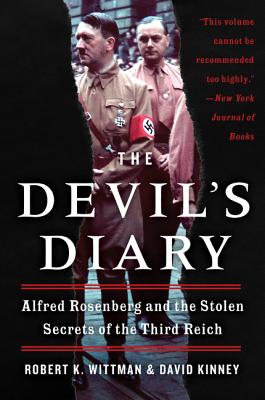 How could educated people put so much stock in an obvious tyrant? Why kind of person would endure years of hardship because he so much believed in a philosophy that was insanely cruel? Meet Alfred Rosenberg, one of the original and most loyal members of Hitler's inner circle. If you're unfamiliar with him, it wasn't due to his lack of trying. He was the "brains" of the outfit, author of books and articles and speeches designed to sway Germany in Hitler's direction. He also kept a diary, the center piece of this compelling historical mystery. Men like Rosenberg still haunt the internet, misdirecting the lonely and the angry, urging discontent and violent action. This book is not just gripping entertainment. It's an eternal warning.

A groundbreaking World War II narrative wrapped in a riveting detective story, The Devil’s Diary investigates the disappearance of a private diary penned by one of Adolf Hitler’s top aides—Alfred Rosenberg, his “chief philosopher”—and mines its long-hidden pages to deliver a fresh, eye-opening account of the Nazi rise to power and the genesis of the Holocaust

An influential figure in Adolf Hitler’s early inner circle from the start, Alfred Rosenberg made his name spreading toxic ideas about the Jews throughout Germany. By the dawn of the Third Reich, he had published a bestselling masterwork that was a touchstone of Nazi thinking.

His diary was discovered hidden in a Bavarian castle at war’s end—five hundred pages providing a harrowing glimpse into the mind of a man whose ideas set the stage for the Holocaust. Prosecutors examined it during the Nuremberg war crimes trial, but after Rosenberg was convicted, sentenced, and executed, it mysteriously vanished.

New York Times bestselling author Robert K. Wittman, who as an FBI agent and then a private consultant specialized in recovering artifacts of historic significance, first learned of the diary in 2001, when the chief archivist for the U.S. Holocaust Memorial Museum contacted him to say that someone was trying to sell it for upwards of a million dollars. The phone call sparked a decade-long hunt that took them on a twisting path involving a pair of octogenarian secretaries, an eccentric professor, and an opportunistic trash-picker. From the crusading Nuremberg prosecutor who smuggled the diary out of Germany to the man who finally turned it over, everyone had reasons for hiding the truth.

Drawing on Rosenberg’s entries about his role in the seizure of priceless artwork and the brutal occupation of the Soviet Union, his conversations with Hitler and his endless rivalries with Göring, Goebbels, and Himmler, The Devil’s Diary offers vital historical insight of unprecedented scope and intimacy into the innermost workings of the Nazi regime—and into the psyche of the man whose radical vision mutated into the Final Solution.

Robert K. Wittman created the FBI’s Art Crime Team and was the Bureau’s national expert on cultural property crime. He is the author of the New York Times bestseller Priceless. David Kinney is a Pulitzer Prize-winning journalist and author of The Big One and The Dylanologists.

David Kinney is a Pulitzer Prize–winning reporter whose journalism has appeared in numerous publications, including the New York Times. He is the author of The Big One: An Island, an Obsession, and the Furious Pursuit of a Great Fish and The Dylanologists: Adventures in the Land of Bob.

“This volume cannot be recommended too highly. It is another smoking gun with which to condemn the Third Reich and further serves to reinforce what has become a 70-year mantra: We should never forget nor, more importantly, repeat man’s worst inhumanity to man.”
— New York Journal of Books

“A fascinating scholarly detective story centering on the often overlooked ideological architect of the Third Reich...The authors do an excellent job of teasing out the fine details and placing them in the larger context...A footnote to a much larger story but a welcome one.”
— Kirkus Reviews

“The efforts to recover [the diary] make up the most interesting part of art-crime expert Wittman and Pulitzer-winning Kinney’s frequently riveting, serpentine account featuring a Nuremberg prosecutor, a museum archivist, and an FBI agent...The authors have provided an engrossing tale of a detective-style search.”
— Booklist

“The Devil’s Diary is the story of the diary, its eventual recovery, and its harrowing content, providing an intense look at one of the major architects of the Holocaust.”
— Barnes and Noble Reads

“The Devil’s Diary has all the elements of a great book: a hugely influential but forgotten confidant of Adolf Hitler, a long-lost Nazi journal, and a crusading Jewish lawyer who spent his life at war with the leading men of the Third Reich.”
— Joaquin "Jack" Garcia, New York Times bestselling author of Making Jack Falcone

“The Devil’s Diary is a very rewarding read. While exposing in fresh, stunning detail the role Alfred Rosenberg played in the Holocaust, Kinney and Wittman also reveal the oft-tangled but fascinating world where history is recorded and written. Well done!”
— Neal Bascomb, national bestselling author of Hunting Eichmann and The Winter Fortress

“Alfred Rosenberg...arises in horrific clarity in Wittman and Kinney’s engrossing book. Rosenberg’s personal writings, which were nearly lost to history, receive a dramatic interpretation in The Devil’s Diary. It’s an intriguing read for anyone fascinated by the personalities of Nazi Germany.”
— Jack El-Hai, author of The Nazi and the Psychiatrist

“The Devil’s Diary is lively and well written. Part detective story, part history book, it restores Rosenberg to his rightful place in the narrative, a man...who was profoundly influential, not least in providing what meagre intellectual underpinning Nazism could muster...a fascinating read.”
— Roger Moorehouse, author of Killing Hitler, Berlin at War, and The Devil's Alliance

“Those with an interest in German history will find this narrative engaging.”
— Library Journal

“A rollicking memoir... investigative details dazzle... Priceless can read at times, not unpleasantly, as if an art history textbook got mixed up at the printer with a screenplay for The Wire.”
— New York Times on Priceless

“Almost every case he recounts has enough intrigue and suspense for a Hollywood screenplay.”
— Washington Post on Priceless