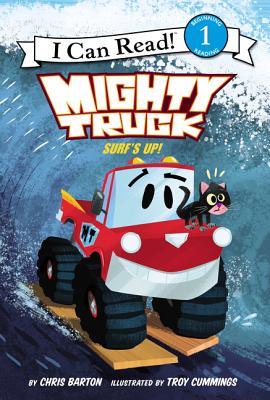 Clarence was just a muddy pickup. One day there was a big storm, and lightning zapped the car wash. Now Clarence has a secret: Water turns him into MIGHTY TRUCK!

Clarence decides to join his neighbor, Mr. Dent, and his cat, Throttle, for a warm day of surfing waves at the beach. But Throttle gets into some gnarly water after Clarence learns that Throttle can’t swim. Mr. Dent needs Clarence’s help to rescue his cat!

Can Mighty Truck save the day?

Might Truck: Surf’s Up is a Level One I Can Read, which means it’s perfect for children learning to sound out words and sentences.

Troy Cummings has written and illustrated a number of books, including the Mighty Truck series, Giddy-Up, Daddy!, and the Notebook of Doom series. He lives in Greencastle, Indiana, with his nice family and mean cat.