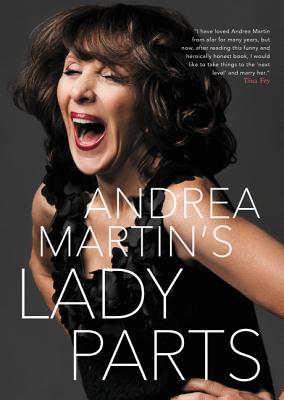 A hilarious, entertaining, and often moving memoir, from the multiple Tony and Emmy-awarding winning actress and comedienne, and SCTV alum, Andrea Martin

Whether lighting up the small screen in her new TV series, Working the Engels, on NBC, or stealing scenes on the big screen in My Big Fat Greek Wedding and Hedwig and the Angry Inch, or starring on the stage in her recent Tony award winning role as Berthe in Pippin, Andrea Martin has long entertained audiences with her hilarious characterizations and heartwarming performances. Martin has worked stages, sets and even trapezes across North America, playing to houses packed with adoring fans, all of whom instantly recognize the star who has entertained us for nearly forty years.

In Andrea Martin's Lady Parts, Martin, for the first time, shares her fondest remembrances of a life in show business, motherhood, relationships, no relationships, family, chimps in tutus, squirrels, and why she flies to Atlanta to get her hair cut. Martin opens up her heart in a series of eclectic, human, always entertaining and often moving essays. Lady Parts will make you giggle and may make you cry. This is a powerful collection of stories by a woman with a truly storied life.

Andrea Martin was cast in the 1970 American touring company production of You're a Good Man, Charlie Brown, in which she played Lucy. During the tour, she visited Toronto, fell in love with the city and moved there. Soon after, she was cast in the legendary Toronto production of Godspell, with fellow performers Victor Garber, Martin Short, Eugene Levy, Dave Thomas, Gilda Radner, Jayne Eastwood and Paul Shaffer, the musical director. Martin has appeared in numerous theater and television productions around the world, including Toronto's Second City stage show, which led to the critically acclaimed SCTV. She has also been recognized with many awards, especially prized among them her two Emmys, two Tonys and from Canada, her two Geminis and four ACTRAs. After winning the 2013 Tony for creating the role of Berthe in the revival of Pippin, she returned to the stage in April of this year in Act One, for which she won the Outer Critics Circle award. This fall finds her once again on Broadway for 24 special performances of Pippin before packing her trapeze and taking the show to San Francisco and Los Angeles. Her next film, Night at the Museum 3, opens December 19.

“I have loved Andrea Martin from afar for many years, but now, after reading this funny and heroically honest book, I would like to take things to the ‘next level’ and marry her.” — Tina Fey

“A lively, bawdy, and emotional memoir from one of our finest comedy artists.” — Steve Martin

“Andrea Martin’s genius at combining hilarity and poignancy is breathtaking and will break your heart. From the first page you know this is going to be a brilliant and joyous ride with one of the truly great, funny originals.” — Martin Short