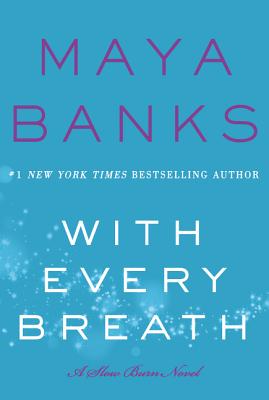 This is book number 4 in the Slow Burn Novels series.

#1 USA Today and New York Times bestselling author Maya Banks continues her suspenseful and sizzling Slow Burn series with this fourth book—a mesmerizingly sexy tale of a strong, brilliant woman who encounters the one man who makes her lose all control.

Eliza Cummings fought free of a monster who terrorized her when she was an innocent teenager and helped put him away for good. She took a job with Devereaux Security Services and devoted every hour to taking down the very thing she’d nearly become. No one, not even those closest to her, know her darkest, shameful secrets. But now the killer has been set free on a legal loophole and it’s only a matter of time before he comes for her. Eliza's only choice is to run and lead the monster away from the people she loves.

Wade Sterling has always lived by his own rules, a law unto himself who answers to no one. He’s never professed to be a good man, and he’s definitely not hero material. Wade never allows anyone close enough to see the man behind the impenetrable mask—but one woman threatens his carefully leashed control. He took a bullet for her and the result was more than a piece of metal entrenched in his skin. She was under his skin and nothing he did rid himself of the woman with the courage of a warrior and who thinks nothing of putting her life before others.

But when Wade sees a panicked and haunted Eliza he knows something is very wrong, because the fool woman has never been afraid of anything. And when she tries to run, the primal beast barely lurking beneath his deceptively polished façade erupts in a rage. She may not know it, but she belongs to him. This time, Eliza isn't going to play the protector. She was damn well going to be the protected. And as long as Wade breathes, no one will ever hurt what is his.

Praise for the novels of Maya Banks: “Maya Bank’s Keep Me Safe takes readers into the black depths of anguish, face-to-face with evil. Her characters are a testament to the strength of the human spirit, and to the power love has to heal even the deepest wounds.”
— Linda Howard, New York Times and USA Today bestselling author

“Caleb and Ramie’s intense connection and fiercely passionate romance will keep readers hooked along with suspense and intrigue. Banks’ first novel in her new Slow Burn series will leave readers wishing for the next one.”
— Romantic Times BOOKclub, 4 1/2 stars

“A well-paced read with non-stop action and buckets of family drama, but there are also some gorgeous romantic moments.
— Heroesandheartbreakers.com

“[A] one-two punch of entertainment that will leave readers eager for the next book.”
— Publishers Weekly

“Move over Fifty Shades...Maya got a little somethin’ somethin’ for ya.”
— Examiner.com

“Maya Banks…really dragged me through the gamut of emotions. From…‘is it hot in here?’ to ‘oh my GOD’…I’m ready for the next ride now!”
— USA Today

“Maya Bank’s KEEP ME SAFE takes readers into the black depths of anguish, face-to-face with evil. Her characters are a testament to the strength of the human spirit, and to the power love has to heal even the deepest wounds.”
— New York Times and USA Today bestselling author Linda Howard
My Account • Sign In • Sign Out • Register
NEW & USED BOOKS
AUTHOR EVENTS • GIFTS
Tempe
6428 South McClintock Drive
480.730.0205
[Google Map]
10am-7pm daily
Trade Counter 11am-6pm daily