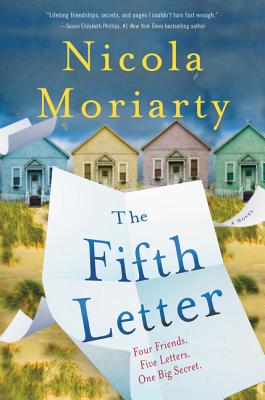 By Nicola Moriarty
Email or call for price
Hard to Find

Nicola Moriarty makes her US debut with this stunning page-turner for fans of Jojo Moyes, Emily Griffin, Kate Morton, and Jessica Knoll, about four best friends on a relaxing vacation that turns devastating when old secrets are revealed, long-held grudges surface, shocking lies are exposed, and a shattering betrayal is discovered—an anonymous hate-filled letter that one of them writes—shaking the foundation of their lives.

Best friends from high school, Joni, Deb, Eden, and Trina had always looked forward to the vacations they spent together. But the demands of careers, husbands, and babies gradually pulled them apart, and now their annual getaways may be a thing of the past. Joni doesn’t want to lose her friends, and this year she’s coaxed them all back together for some fun at a beach house.

Late on a laughter and wine-filled night, the women dare one another to write anonymous letters, spilling her most intimate thoughts like they did as teenagers. But the fun game meant to bring them closer together turns painfully serious, exposing cracks in their lives and their relationships. Each letter is a confession revealing disturbing information. A rocky marriage. A harrowing addiction. A hidden pregnancy. A heartbreaking diagnosis.

Days later, Joni notices something in the fireplace—a crumpled and partially burned fifth letter that holds the most shattering admission of all.

Best friends are supposed to keep your darkest secrets. But the revelations Joni, Deb, Eden and Trina have shared will have unforeseen consequences . . . and none of them will ever be the same.

Nicola Moriarty is a Sydney-based novelist, copywriter and mum to two small (but remarkably strong-willed) daughters. In between various career changes, becoming a mum and completing her Bachelor of Arts, she began to write. Now she can’t seem to stop. Her previous works include the novel, The Fifth Letter, which was published in several countries and optioned by Universal Cable Productions for film and television. She blogs (occasionally) at her website here: www.nicolamoriarty.com.au.

“The meandering stories of these women are held together with the powerful question of who wrote the last letter, which reveals just how precarious childhood friendships are […] the book […] adeptly exposes the striking differences among the four friends and the five letters.”
— Publishers Weekly

“The brilliant unraveling of this sisterhood of secrets will leave you wondering how well you really know the best friends you’ve known forever. A must-read before your next Girl’s Night.”
— Mary Hogan, author of The Woman in the Photo and Two Sisters

“Lifelong friendships, secrets, and pages I couldn’t turn fast enough. The Fifth Letter is one of my favorite books this year, and Nicola Moriarty is now on my short list of favorite women’s fiction authors.”
— Susan Elizabeth Phillips, #1 New York Times bestselling author

“Readers [...] will race to the end as a credit to Nicola’s fine sense of pacing and suspense. An author to watch.”
— Tracy Babiasz, Booklist