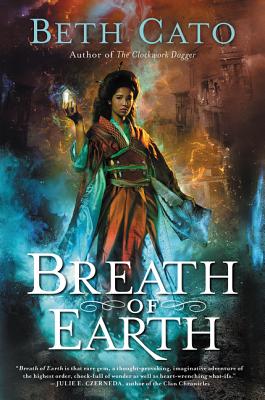 This is book number 1 in the Blood of Earth series.

After the earth’s power under her city is suddenly left unprotected, a young geomancer must rely on her unique magic to survive in this fresh fantasy novel from the author of the acclaimed The Clockwork Dagger.

In an alternate 1906, the United States and Japan have forged a powerful confederation— the Unified Pacific—in an attempt to dominate the world. Their first target is a vulnerable China. In San Francisco, headstrong secretary Ingrid Carmichael is assisting a group of powerful geomancer wardens who have no idea of the depth of her own talent—or that she is the only woman to possess such skills.

When assassins kill the wardens, Ingrid and her mentor are protected by her incredible magic. But the pair is far from safe. Without its full force of guardian geomancers, the city is on the brink of a cataclysmic earthquake that will expose the earth’s power to masterminds determined to control the energy for their own dark ends. The danger escalates when Chinese refugees, preparing to fight the encroaching American and Japanese forces, fracture the uneasy alliance between the Pacific allies, transforming San Francisco into a veritable powder keg. And the slightest tremor will set it off. . . .

Forced on the run, Ingrid makes some shocking discoveries about herself. Her already considerable magic has grown even more fearsome . . . and she may be the fulcrum on which the balance of world power rests.

“Where Breath of Earth really shines is in its detail and relevance. Cato’s exhaustive research of the time and place gives the book texture and grit…[and] she embroiders it richly with gorgeous period setpieces, imaginative speculation and the charismatic Ingrid herself.” — NPR

“The acclaimed Cato creates an alternate early 20th-century San Francisco of stunning detail. Drawing on the power struggles of the refugees and women’s work, this vivid reality will keep readers intrigued to the very end.” — Library Journal (starred review)

“Breath of Earthis that rare gem, a thought-provoking, imaginative adventure of the highest order, chock full of wonder as well as heart-wrenching what ifs. It’s reminiscent of Jules Verne at his best, with brilliant characters who linger in the mind and heart. Bravo!” — Julie E. Czerneda, author of The Clan Chronicles on BREATH OF EARTH

“Beth Cato gives steampunk a magical, global twist in an action-packed adventure that keeps the pages turning in anticipation. And if you don’t fall in love with Ingrid Carmichael after reading this, you have no soul.” — Michael J. Martinez, author of MJ-12: Inception and The Daedalus Incident on BREATH OF EARTH

“Cato cleverly brings her colorful Barbary Coast-era San Francisco to life, highlighting the neglected perspectives of the outsiders and the dispossessed who made up the majority of its populace.” — Publishers Weekly