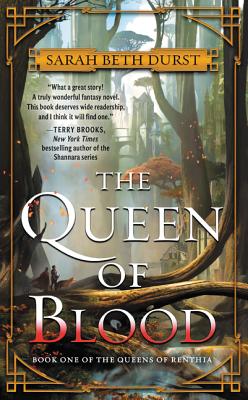 By Sarah Beth Durst
$7.99
On Our Shelves Now

This is book number 1 in the Queens of Renthia series.

Listen here. There are Queens (yes it's an awesome matriarchal society) and magic. Enough said right? Not at all! The queens are almost god level powerful beings and the magic is fueled by controlling spirits that control all the elements that are found in nature (Imagine Avatar the Last Air Bender, but soooooo much deadlier). If that doesn't light a fire under ya then maybe the fact that this book does world building so excellently will! Seriously, every scene unfolded in my head so spectacularly and I want everyone to get the same experience. Warning: brutally violent sometimes. — From Liam's Picks

Everything has a spirit: the willow tree with leaves that kiss the pond, the stream that feeds the river, the wind that exhales fresh snow…

But the spirits that reside within this land want to rid it of all humans. One woman stands between these malevolent spirits and the end of humankind: the queen. She alone has the magical power to prevent the spirits from destroying every man, woman, and child. But queens are still only human, and no matter how strong or good they are, the threat of danger always looms.

Because the queen’s position is so precarious, young women are specially chosen to train as her heirs. Daleina, a seemingly quiet academy student, simply wants to right the wrongs that have befallen the land. Meanwhile, the disgraced champion Ven has spent his exile secretly fighting against the growing number of spirit attacks. When Daleina and Ven join forces, they embark on a treacherous quest to find the source of the spirits’ restlessness—a journey that will force them to stand against both enemies and friends to save their land…before it’s bathed in blood.

Sarah Beth Durst is the award-winning author of over twenty fantasy books for adults, teens, and kids, including The Queens of Renthia series, Drink Slay Love, and The Stone Girl’s Story. She won an ALA Alex Award and a Mythopoeic Fantasy Award, and has been a finalist for SFWA's Andre Norton Award three times. She is a graduate of Princeton University, where she spent four years studying English, writing about dragons, and wondering what the campus gargoyles would say if they could talk. Sarah lives in Stony Brook, New York, with her husband, her children, and her ill-mannered cat. For more information, visit her at sarahbethdurst.com.

“Wow, girl! What a great story! A truly wonderful fantasy novel which doubles as an allegory for our own earthly struggle between Man and Nature. Filled with fresh ideas and excitement, told with verve and heart. This book deserves a wide readership, and I think it will find one.”
— Terry Brooks, NYT Bestselling author of the Shannara series

“Durst, an award-winning YA author (Vessel) and three-time Andre Norton Award finalist, presents a thrilling beginning to a sweeping series about searching for sovereignty and truth in order to save one’s land.”
— Library Journal (starred review)

“The Queen of Blood is full of rich tension from the opening scene to the nail-biting finale.”
— Jeff Wheeler, Wall Street Journal bestselling author of Kingfountain and Muirwood series