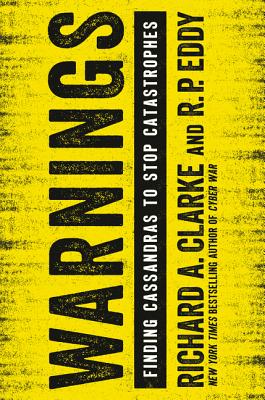 The world we live in builds in complexity daily, and the volume from its voices rises in equal measure. How do we as a society prepare for the problems of tomorrow when it seems we can't solve the puzzles of today? Warnings is the trailblazer text that governments, institutions, and citizens need to follow. — From Drew's Picks

Warnings is the story of the future of national security, threatening technologies, the U.S. economy, and possibly the fate of civilization.

In Greek mythology Cassandra foresaw calamities, but was cursed by the gods to be ignored. Modern-day Cassandras clearly predicted the disasters of Katrina, Fukushima, the Great Recession, the rise of ISIS, the spread of viruses and many more. Like the mythological Cassandra, they were ignored. There are others right now warning of impending disasters—from cyber attacks to pandemics—but how do we know which warnings are likely to be right?

Through riveting explorations in a variety of fields, the authors—both accomplished CEOs and White House National Security Council veterans—discover a method to separate the accurate Cassandras from the crazy doomsayers. They then investigate the experts who today are warning of future disasters: the threats from artificial intelligence, bio-hacking, malware attacks, and more, and whose calls are not being heeded. Clarke’s and Eddy’s penetrating insights are essential for any person, any business, or any government that doesn’t want to be a blind victim of tomorrow’s catastrophe.

Richard A. Clarke, a veteran of thirty years in national security and over a decade in the White House, is now the CEO of a cyber-security consulting firm. He is the author of seven previous books, including the bestsellers Against All Enemies and Cyber War.

R.P. Eddy, is the CEO of Ergo, one of the world's leading intelligence firms. His multi-decade career in national security includes serving as Director at the White House National Security Council, as a senior US and UN diplomat, and he current advises intelligence agencies, major corporations and investors. He resides in Greenwich, Connecticut.

“Fascinating. Richard Clarke and R. P. Eddy try to construct a science that separates the true prophets from the fantasists. It’s a fascinating account, and oh, if we’d only paid attention…!”
— Lawrence Wright, Pulitzer Prize-winning author of The Looming Tower and The Terror Years

“Dick Clarke and R.P. Eddy know what they are talking about-this is not a book about miracles, it is a book about how to recognize warnings in a very dangerous world.”
— Leon Panetta, former Secretary of Defense

“Now, more than ever, you should read this book and learn from two of the very best. A gripping read and a brilliant view of an uncertain future. Clarke and Eddy deliver veteran insights all leaders need to hear.”
— General Michael Hayden (Ret.), former CIA director

“Clarke and Eddy’s veteran insight will be required reading for those who want to win in a future dominated by technologies and national security threats most haven’t even begun to ponder.”
— Senator George Mitchell

“In Warnings, Clarke and Eddy turn mythology into sociology and anecdote into analysis in a way that is both enlightening and important for averting catastrophes.”
— Garry Kasparov, author of Winter Is Coming and 13th World Chess Champion

“A must read. In an increasingly risky world, finding people who see around corners is key—but once you’ve found them, it’s just as important to listen. We need to listen to Clarke and Eddy, their leadership and vision has been second to none for decades, and they are right again.”
— William Bratton, former NYPD Commissioner
My Account • Sign In • Sign Out • Register
NEW & USED BOOKS
AUTHOR EVENTS • GIFTS
Tempe
6428 South McClintock Drive
480.730.0205
[Google Map]
Sunday-Friday 10am-8pm
Saturday 9am-8pm
Trade Counter 11am-6pm daily