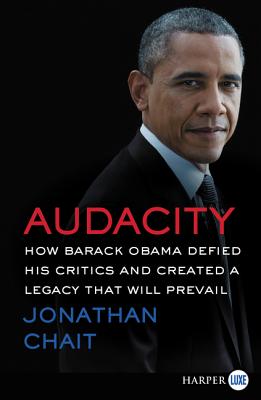 "An essential starting point for those assessing the Obama presidency.” —Washington Monthly

Two presidencies later, the time has never been better to revisit the legacy of Barack Obama. In Audacity, New York Magazine writer Jonathan Chait makes the unassailable case that, in the eyes of history, Obama will be viewed as one of America’s best and most accomplished presidents.

Over the course of eight years, Barack Obama has amassed an array of outstanding achievements. His administration saved the American economy from collapse, expanded health insurance to millions who previously could not afford it, negotiated an historic nuclear deal with Iran, helped craft a groundbreaking international climate accord, reined in Wall Street and crafted a new vision of racial progress. He has done all of this despite a left that frequently disdained him as a sellout, and a hysterical right that did everything possible to destroy his agenda even when they agreed with what he was doing.

Now, as the page turns to our next Commander in Chief, Jonathan Chait, acclaimed as one of the most incisive and meticulous political commentators in America, digs deep into Obama’s record on major policy fronts—economics, the environment, domestic reform, health care, race, foreign policy, and civil rights—to demonstrate why history will judge our forty-fourth president as among the greatest in history.

Audacity does not shy away from Obama’s failures, most notably in foreign policy. Yet Chait convincingly shows that President Obama has accomplished what candidate Obama said he would, despite overwhelming opposition—and that the hopes of those who voted for him have not been dashed despite the smokescreen of extremist propaganda and the limits of short-term perspective.

Jonathan Chait is a political columnist for New York magazine. He was previously a senior editor at the New Republic and has also written for the Los Angeles Times, the New York Times, the Wall Street Journal, and the Atlantic. He has been featured throughout the media, including appearances on NPR, MSNBC, Fox News, CNN, HBO, The Colbert Report, Talk of the Nation, C-SPAN, Hardball, and on talk radio in every major city in America. He lives in Washington, D.C.

“Chait’s brilliant new book, Audacity, upends the conventional wisdom of the Washington commentariat -- and a surprising number of liberals -- that Barack Obama’s presidency was little more than eight years of disappointment…setting out a compelling case that he was one of the most successful presidents of modern times.” — The Guardian

“A timely, trenchant and relentlessly argued book presenting the 44th president in terms that he himself would approve. Not only did Obama change America for the better, Chait writes, he also cemented a new policy infrastructure that will resist Trump’s efforts to tear it down.” — New York Times Sunday Book Review

“Chait offers a well-organized, clearly written case that will be valuable to future historians in their assessments.” — Kirkus Reviews

“[Chait] lacerates wimpish liberals and the duplicitous cynics on the right. He points out, over and over again, that, ideologically speaking, Obama’s policies were largely derived from a liberal Republican tradition.” — Brooklyn Rail

“Chait’s command of policy and politics, and his clarity of thought, guarantee that Audacity will remain an essential starting point for those assessing the Obama presidency.” — Washington Monthly

“[Chait is] one of the most influential political journalists of our time…the verve with which he pursues his quarries has made him one of our great polemicists.” — New Republic

“Audacity is a sturdy defense of the past eight years and an attack on left-wing Americans who moan about Obama’s timidity. And in this endeavor it is a rip-roaring success. Chait tells the Obama story with enormous sympathy, but with enough detachment to make it credible.” — The Times (UK)