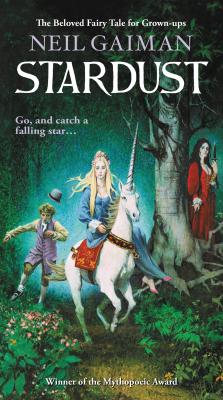 Stardust is so charming, strange, and delightful that it makes my wee heart glow with the power of 1000 suns. It's a book full of swashbuckling adventure, dastardly and hilarious villains, and so much weird magic that you'll never be sure what's coming next. If you loved the movie version of Stardust then you gotta read this book! There are lots of differences to keep you entertained and chortling along so don't worry about things being too predictable. This book is anything but that! — From Liam's Picks

Now a major motion picture—this charming fairy tale by the #1 New York Times bestselling author, weaves a magical story set long ago in the tiny English village of Wall, a place where things are not quite what they seem.

Tristran Thorn promises to bring back a fallen star for his beloved, the hauntingly beautiful Victoria Forester—and crosses the wall that divides his English country town from another, more dangerous world of lords and witches, all of them in search of the star. Rich with adventure and magic, Stardust is one of master storyteller Neil Gaiman's most beloved tales.

Neil Gaiman is a #1 New York Times bestselling author of books for children and adults whose award-winning titles include Norse Mythology, American Gods, The Graveyard Book, Good Omens (with Terry Pratchett), Coraline, and The Sandman graphic novels. Neil Gaiman is a Goodwill Ambassador for UNHCR and Professor in the Arts at Bard College.

“Strange . . . marvelous. . . . Stardust takes us back to a time when the world was more magical, and, real or not, that world is a charming place.”
— Philadelphia Inquirer