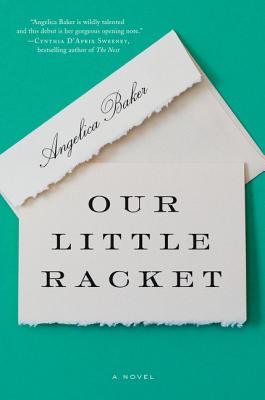 Those who liked The Nest should take a look at this book, the author's debut novel, which is situated similarly on the wealthy, WASP-y East Coast. The story follows the lives of five women as they react with varying degrees of morality, self-protection and schadenfreude to the financial downfall of the bank headed by the husband of one of the five. His daughter, Madison is only fifteen, has adored her father and has a very rude awakening, This book is over 400 pages but I flew through it, riveted by the vividly drawn characters, and the author's sure hand guiding us through the wealthy, manipulative thicket they inhabit. — From Georgeann's Picks

A captivating debut about wealth, envy, and secrets: the story of five women whose lives are dramatically changed by the downfall of a financial titan

On September 15, 2008, the world of Greenwich, Connecticut, is shaken. When the investment bank Weiss & Partners is shuttered, CEO Bob D’Amico must fend off allegations of malfeasance, as well as the judgment and resentment of his community. As panic builds, five women in his life must scramble to negotiate power on their own terms and ask themselves what —if anything—is worth saving.

In the aftermath of this collapse, Bob D’Amico’s teenage daughter Madison begins to probe her father’s heretofore secret world for information. Four other women in Madison’s life —her mother Isabel, her best friend Amanda, her nanny Lily, and family friend Mina —begin to question their own shifting roles in their insular, moneyed world.

For the adults, this means learning how to protect their own in a community that has turned against them. For the younger generation, it means heightened rebellion and heartache during the already volatile teenage years. And for Lily, it means deciding where her loyalties lie when it comes to the family in which she is both an essential member and, ultimately, an outsider.  All these women have witnessed more than they’ve disclosed, all harbor secret insecurities and fears, and all must ask themselves—where is the line between willful ignorance and unspoken complicity?