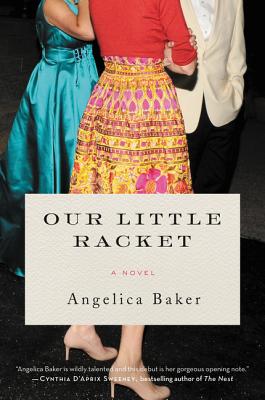 “Baker is wildly talented and this debut is her gorgeous opening note.” —Cynthia D’Aprix Sweeney, bestselling author of The Nest

A captivating novel about wealth, envy, and secrets: the story of five women whose lives are dramatically changed by the downfall of a financial titan.

The women of Greenwich, Connecticut, have never thought to question the wealth or the security of their community. But at the onset of a great national recession, they find themselves forced to reckon, for the first time, with the fragility of their sheltered lives. The investment bank Weiss & Partners has shuttered, and in the wake of CEO Bob D’Amico’s downfall, five women in his life scramble to negotiate power on their own terms and ask themselves what—if anything—is worth saving.

In the aftermath of this collapse, Bob’s teenage daughter, Madison, begins to probe her father’s heretofore secret world for information. Four other women close to Madison—her mother, Isabel; her best friend, Amanda; her nanny, Lily; and family friend Mina—begin to question their own shifting roles in their insular, moneyed world. For the adults, this means learning how to protect their own in a community that has turned against them. For the younger generation, it means heightened rebellion and heartache during the already volatile teenage years. And for Lily, it means deciding where her loyalties lie when it comes to the family in which she is both an essential member and, ultimately, an outsider. All these women have witnessed more than they’ve disclosed, all harbor secret insecurities and fears, and all must ask themselves: where is the line between willful ignorance and unspoken complicity?

“A personal, thought-provoking portrait emerges of the American Dream, complete with a web of visible and invisible cracks in the foundation.”
— Publishers Weekly