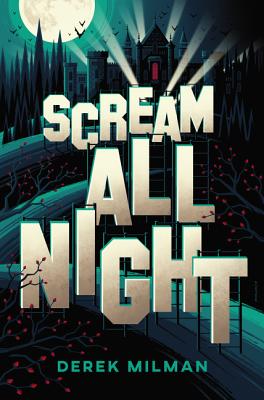 By Derek Milman
Email or call for price
Out of Print

A darkly hilarious contemporary realistic young adult novel about growing up and finding your place in the world, perfect for fans of Me and Earl and the Dying Girl and Running with Scissors.

DARIO HEYWARD KNOWS ONE THING: He’s never going back to Moldavia Studios, the iconic castle that served as the set, studio, and home to the cast and crew of dozens of cult classic B-horror movies. It’s been three years since Dario’s even seen the place, after getting legally emancipated from his father, the infamous director of Moldavia’s creature features.

But then Dario’s brother invites him home to a mysterious ceremony involving his father and a tribute to his first film—The Curse of the Mummy’s Tongue. Dario swears his homecoming will be a one-time visit. A way for him to get closure on his past—and reunite with Hayley, his first love and costar of Zombie Children of the Harvest Sun, a production fraught with real-life tragedy—and say good-bye for good. But the unthinkable happens—Dario gets sucked back into the twisted world of Moldavia and the horrors, both real and imagined, he’s left there.

With only months to rescue the sinking studio and everyone who has built their lives there, Dario must confront the demons of his past—and the uncertainties of his future. But can he escape the place that’s haunted him his whole life?

Derek Milman has worked as a playwright, screenwriter, film school teacher, DJ, and underground humor magazine publisher. A classically trained actor, he has performed on stages across the country and appeared in numerous TV shows, commercials, and films.Derek currently resides in Brooklyn, New York. Scream All Night is his first novel. You can find Derek online at www.derekmilman.com.

“Debut author Milman’s darkly comedic coming-of-age story seamlessly combines monsters—both real and imagined—with difficult subjects such as neglect, abandonment, and psychosis....Dario’s journey, though more extreme than most, is relatable, but the story’s biggest lesson of all is that it is possible to go home again.”
— Publishers Weekly (starred review)

“Derek Milman bursts onto the YA scene with a completely unique concept and a delightfully quirky setting. It has all of my favorite things: plenty of absurdity wrapped in undeniable heart. Scream All Night is not to be missed.”
— Goldy Moldavsky, New York Times bestselling author of Kill the Boy Band and No Good Deed

“Scream All Night is a hilarious, heart-wrenching, psychedelic ride. Derek Milman has written a searingly original debut. I couldn’t stop reading.”
— Jeff Garvin, author of Symptoms of Being Human

“Dario’s first-person narrative avoids being lachrymose and lands somewhere both self-aware of the surrounding silliness and respectful in matters of mental illness and abuse. Moldavia is resplendent with wonderfully wacky details, characters and settings...plenty of gory details to delight creature-feature and horror movie buffs.”
— Kirkus Reviews

“Milman has a field day with horror movie tropes, walking a nerve-wrackingly fine line between gothic horror and send-up, challenging readers to discern just where the laughs and shivers are leading...And the award for genre-bending serio-comic tender horror debut goes to...Derek Milman.”
— Bulletin of the Center for Children’s Books, Recommended title

“Milman graces readers with a distinctive and immersive setting and an authentically hilarious voice. It’s the summer read you never knew you needed.”
— Buzzfeed

“At once hilarious, wrenching, and marinated in inspired details....Scream All Night slashes through the expected, trouncing the predictable with eerie power.”
— Center for Fiction

“[A] dark and occasionally wacky tale of a young man coming to terms with his troubled past.”
— Voice of Youth Advocates (VOYA)