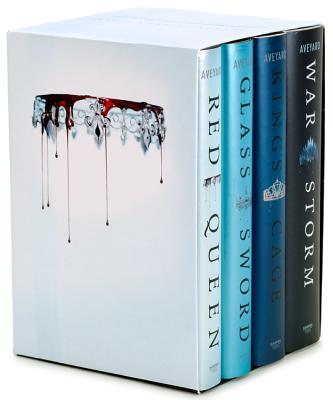 Power is a dangerous game.

Mare Barrow, a lowly Red in a world of red-blooded laborers and silver-blooded elites, thought she knew what her future held. But when she learns that her red blood has been disguising a secret ability, one usually reserved only for Silvers, her life is turned upside down.

How will the Silver ruling class keep her secret hidden from the increasingly restless Red population and their Scarlet Guard revolutionaries? And how will Mare use her sudden power to change the caste system, the kingdom, and the world—forever?

With every book in Victoria Aveyard’s blockbuster Red Queen quartet in one box set, you can follow this series from the spark that began everything, all the way to the electrifying conclusion.

Plus don't miss Realm Breaker! Irresistibly action-packed and full of lethal surprises, this stunning fantasy series from Victoria Aveyard, #1 New York Times bestselling author of the Red Queen series, begins where hope is lost and asks: When the heroes have fallen, who will take up the sword?

Victoria Aveyard was born and raised in East Longmeadow, Massachusetts, a small town known only for the worst traffic rotary in the continental United States. She moved to Los Angeles to earn a BFA in screenwriting at the University of Southern California. She currently splits her time between the East and West coasts. As an author and screenwriter, she uses her career as an excuse to read too many books and watch too many movies. She is the author of the New York Times bestselling Red Queen series, and you can visit her online at www.victoriaaveyard.com.

Praise for the Red Queen series: “Aveyard’s ‘little lightning girl’ remains a relatable and deeply flawed heroine... Aveyard adeptly sets the scene for a fourth book to follow, amid a war not yet won.” — Publishers Weekly

Praise for the Red Queen series: “Aveyard certainly has a flair for the dramatic, which teens will eat up. The action hits the ground running and doesn’t stop until after the last page is turned.” — School Library Journal

Praise for the Red Queen series: “Fast-paced and action packed, Glass Sword is compelling and strong, guaranteed to gratify anxious readers of the series and fans of dystopian and fantasy literature.” — Voice of Youth Advocates (VOYA)

Praise for the Red Queen series: “A volatile world with a dynamic heroine.” — Booklist

Praise for the Red Queen series: “This blend of fantasy and dystopia will be an unexpected and worthy addition to many genre fans’ reading list.” — Bulletin of the Center for Children’s Books