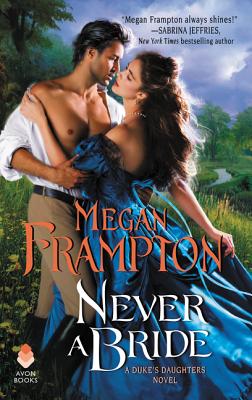 The next thrilling installment in Megan Frampton’s scintillating A Duke’s Daughters series.

Together, they enter a make-believe betrothal that shocks London society…

After twelve years in Her Majesty’s Navy, Griffith Davies must leave his sea-going life of outrageous freedom behind, forced to rejoin London society as the heir to the Duke of Northam. But though he is now shackled to the land, he has no desire to wed some innocently dull young thing.  Who best to shield him from the matchmakers than a woman as notorious as he?

Lady Della Howlett’s reputation was tattered years ago, so entering into a false engagement with Griffith is hardly going to make matters worse. What’s one more shock to the ton to set their tongues wagging? And this pact certainly has its pleasures; the passion Griffith commands in her goes well beyond their agreement. Could her feelings might be more honorable than she’d first imagined?

Soon, Griffith and Della are arousing more than scandal, they’re courting heartbreak.  And more than their reputations could still be at risk.

Megan Frampton writes historical romance under her own name and romantic women’s fiction as Megan Caldwell. She likes the color black, gin, dark-haired British men, and huge earrings, not in that order. She lives in Brooklyn, New York, with her husband and kid.

“A sparkling romance, bright and beautiful, and oh-so-swoony!” — Fresh Fiction

“Rich in subtle characterization, deftly seasoned with plenty of piquant wit, and spiced with just the right amount of sexy passion, [...] a romantic tour de force. With this splendidly satisfying love story, Frampton proves that she is one of the rising new stars in the historical romance genre.” — Booklist (starred review)

“Frampton’s novella will have readers smiling from ear to ear as our protagonists put all their energies into avoiding their growing feelings for each other.” — Library Journal (starred review)

“With the second dazzling installment in her Duke’s Daughters series, Frampton once again works her distinctive brand of literary alchemy by taking superbly nuanced characters, plenty of potent passion, and a generous measure of delightfully tart wit and distilling all these ingredients down into another irresistible romance.” — Booklist (starred review)