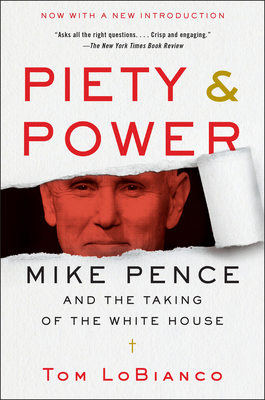 A revealing biography of Mike Pence, the most secretive vice president in modern history, from a reporter with unprecedented access.

“I’m a Christian, a conservative, and a Republican . . . in that order.” —Mike Pence

As the impeachment of President Donald Trump remains a constant topic of discussion in political circles, the questions around our current vice president also continue to swirl, and in some ways, the puzzlement over his true nature has never truly been clear. Tom LoBianco, a longtime Pence reporter, cuts to the core of the nation’s most enigmatic politician in this intimate yet expansive account of the vice president’s journey to the White House. In Piety & Power, LoBianco follows Pence from his evangelical conversion in college to his failed career as a young lawyer, to his thwarted attempts at politics until he hitched his wagon to far-right extremism, becoming the Congressional poster boy for faith-based policy and Tea Party rhetoric. Giving readers a minute-by-minute account of the selection process that made him Donald Trump’s unlikely running mate in 2016, Piety & Power traces Pence’s personal and political life, painting a picture of a man driven by faith and conviction, yes, but also a hunger for power.

LoBianco crafts a revealing portrait of the real Mike Pence—a politician whose understated style masks a drive for power, but also a surprising political acumen—by drawing on years of research, over one hundred exclusive interviews with those closest to the vice president, and deep ties both within the Beltway and Indiana state politics. Highlighting Pence’s strained, at times obsequious, relationship with Trump; his marriage to Karen; his deeply repressed personality; his presidential aspirations and plans for America’s future; and his deep-rooted faith in his country, in God, and ultimately himself; Piety & Power provides insights and answers as it sheds light on this ambitious Midwestern politician, his past, and his possible future.

Tom LoBianco is a longtime reporter who has covered Mike Pence from the statehouse to the White House for the Associated Press, CNN, and the Indianapolis Star. LoBianco is a regular political analyst on national television and radio, including CNN, FOX News, MSNBC, NPR and more. In more than a decade covering politics, he has unearthed scores of stunning stories. He lives in the Washington D.C. area with his wife and daughter.

“LoBianco offers key insights into Pence’s personal life and career, including his evangelical conversion, and gives a highly-detailed history of how President Trump selected Pence to be his running mate in 2016.” — Time

“[There are] many details that LoBianco includes in the latest book that tries to answer the question of who is Mike Pence – and why the devout Christian has entwined himself with Trump.”  — USA Today

“In his evenhanded debut book, the author…allows the facts to speak for themselves. …A useful portrait of an enigmatic politician.” — KIRKUS REVIEWS

“Like Bob Woodward of the Washington Post, [LoBianco is] good at getting people to talk. … LoBianco has come up with the best detailed treatment of Pence in the context of Indiana politics.” — INDIANAPOLIS STAR