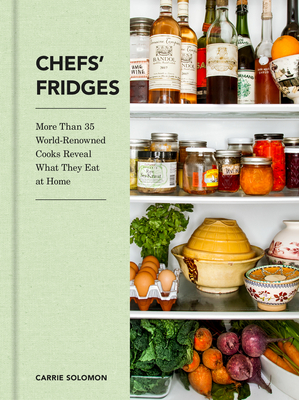 “Anyone with even the vaguest interest in food (or other people’s houses generally) should order Carrie Solomon and Adrian Moore’s newly released Chefs’ Fridges.”—British Vogue

"If you’ve ever wondered what your favorite chef eats at home, now’s your chance to find out. Chefs’ Fridges hops all over the continents of North America and Europe, peeking inside the home fridges of Nancy Silverton, Hugh Acheson, Enrique Olvera, José Andrés, Jessica Koslow, and more acclaimed chefs."—Food & Wine

Find out what’s in some of the world’s most esteemed chef’s kitchens with this fascinating compendium that showcases more than thirty-five of today’s masters, including José Andrés, Christina Tosi, Alice Waters, Daniel Boulud, Nancy Silverton, Wylie Dufresne, Jean-Georges Vongerichten, Ludo Lefebvre, and Carla Hall—in up-close profiles and gorgeous color photos, plus two recipes for the dishes they like to cook at home.

For authors Carrie Solomon and Adrian Moore, and demonstrably, to the rest of the world, chefs are intriguing creatures. Their creations shape our culture and become an indelible part of our experience. They make food delicious beyond our wildest dreams. But what happens when the chef whites come off and they head home?

Filled with exclusive photographs and interviews granted especially for this book, Chefs’ Fridges is a personal look into the refrigerators and kitchens of more than 35 of the world’s most esteemed chefs, including twelve chefs with thirty-six Michelin stars shared between them. You will feel as if you are having a conversation with a great chef as they stand before an open fridge, deciding what to eat.

Each chef’s entry contains an anecdotal essay that sheds light on his or her personal and culinary background; numerous annotated full-bleed spreads of the contents of their refrigerators and freezers so you can see what makes their culinary clock tick; a short, straightforward Q&A section; an informal portrait in their kitchen; and recipes.

Carrie Solomon is an American photographer and writer who lives in Paris. Since moving there in 2002, she has become one of France’s most renowned culinary photographers. She writes and shoots about food and travel regularly for ELLE France. In addition, she has authored, coauthored, and photographed many books including Inside Chefs’ Fridges, Europe with Adrian Moore, MAKERS Paris with Kate van den Boogert, and Une Américaine à Paris.

Adrian Moore is an award-winning palace concierge by day and a food and culture writer by night. When he is not keeping the secrets of food world luminaries and international jetsetters, he writes for publications like Conde Nast Traveler, Travel and Leisure, and Monocle. Canadian-born but raised in the U.S. to British parents, he lives in Paris.

"In the five years since Carrie Solomon and Adrian Moore’s book Inside Chefs’ Fridges was released, the collective fascination with the world’s leading culinary personalities has only intensified. Through dynamic photography, interviews and improvised recipes, the fully stocked sequel, Chefs’ Fridges, illustrates how the contents of a fridge reveal its owner’s character…peeking inside the larders of beloved food figures feels all the more compelling."
— T: The New York Times Style Magazine

"What do chefs cook when there’s no critic or consumer watching? In a compilation that’s part recipe reference, part personal essay, part journalistic interview, authors Carrie Solomon and Adrian Moore offer an unprecedented peek inside the kitchens of the Michelin Star-holders and culinary innovators we so admire."
— Vogue

"Fridges have a lot of stories to tell, especially if they’re in the kitchen of a notable cook. Chefs’ Fridges is fortuitously timed."
— Bloomberg

"A fridge is a window into one’s soul: a tell-all about one’s idiosyncrasies, affinities and whims. In Chefs’ Fridges, leading US restaurateurs from coast to coast open their aluminium doors. As they spill their culinary secrets and wax poetic about arcane ingredients, these masterful visionaries reveal their guilty pleasures and home-cooking philosophies."
— C Magazine

"When Chefs’ Fridges showed up, my afternoon was planned! And while I’m curious that Carla Hall likes Koeze’s Cream-Nut peanut butter, or that Anthony Rose uses Soom tahini, what is taking me down an internet rabbit hole are the plastic containers meticulously labeled with various colors of painters tape, the mysterious homemade concoctions that these pros keep in weekly rotation."
— Porchlight Book Blog

Find out what gastronomic gurus from around the globe—José Andrés, Alice Waters, Daniel Boulud, Jean-Georges Vongerichten, Ludo Lefebvre, and Barbara Lynch, among them—are stashing in their own kitchens in the glossy pages of this new publication of revealing photos and profiles focused on the fridges of culinary legends.
— Boston Globe

When the world’s most esteemed chefs shed their whites and head home to their kitchens, what do they reach for? Adrian Moore and Carrie Solomon were brave enough to ask. And their new cookbook provides all the juicy, full-color answers. Chefs’ Fridges gives us unprecedented access to iconic chefs’ personal kitchens, favorite brands and quirky personalities. In choosing the chefs, Moore and Solomon wanted to feature a wide range of culinary creatives, from well-established Michelin chefs to up-and-comers just making their mark. What more could you want when standing before an open fridge together, deciding what to eat?
— Mercury News
My Account • Sign In • Sign Out • Register
NEW & USED BOOKS
AUTHOR EVENTS • GIFTS
Tempe
6428 South McClintock Drive
480.730.0205
[Google Map]
Sunday-Friday 10am-8pm
Saturday 9am-8pm
Trade Counter 11am-6pm daily