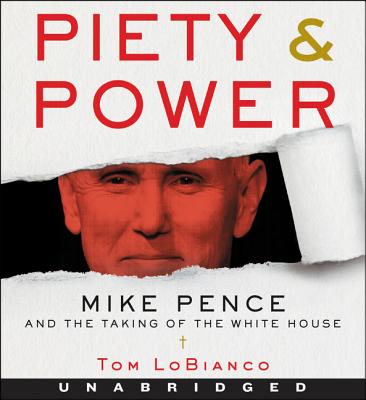 A revealing, in-depth biography of Mike Pence, the most secretive and ingratiating vice president in modern history, from a reporter with remarkable access.

No journalist has covered Mike Pence for as long or as closely as Tom LoBianco. The seasoned political reporter was at the first campaign rally governor Pence held in his hometown of Columbus, Indiana. He was there when Pence returned to Washington as Donald Trump’s vice president. Drawing on his deep ties both within the Beltway and in Indiana state politics, as well as reams of research and deep access to the vice president and his staff, LoBianco offers a revealing portrait of the devout Christian who shocked many of his closest followers when he joined the campaign and became one of the strongest champions of Donald Trump. He also explores the rumors—much debated inside the Beltway and among pundits in the media—surrounding the Vice President’s ambitions to succeed and even "overthrow" Trump.

LoBianco dissects Pence’s entire political life, from his detours in the ’90s, to his rapid ascension through the first decade of the twenty-first century, to the White House, and provides an inside account of how Pence nearly crashed and burned his career while governor, only to miraculously rise from the ashes thanks to the unlikely election of Trump. He also gives a rare look inside the "shadow government" Pence has built—a conservative machine at Trump’s call for now, but one that could just as easily step in if Trump is removed from office.

Piety & Power cuts to the core of the nation’s most enigmatic politician, and unearths new, important, and fascinating anecdotes about Pence’s faith, his marriage to Karen Pence, his bizarre, obsequious relationship with Trump, his deeply buried personality, his ascent to power under John Boehner, and his presidential aspirations and plans for America’s future.

From the explosive revelations of the Russia investigation to the sea change affecting the Republican party and its direction under Trump, it is vital that Americans know more about the man who could ascend to the Oval Office. Piety & Power provides insights and answers as it sheds light on this ambitious Midwestern politician, his past, and his possible future.

Tom LoBianco is a longtime reporter who has covered Mike Pence from the statehouse to the White House for the Associated Press, CNN, and the Indianapolis Star. LoBianco is a regular political analyst on national television and radio, including CNN, FOX News, MSNBC, NPR and more. In more than a decade covering politics, he has unearthed scores of stunning stories. He lives in the Washington D.C. area with his wife and daughter.

“LoBianco offers key insights into Pence’s personal life and career, including his evangelical conversion, and gives a highly-detailed history of how President Trump selected Pence to be his running mate in 2016.” — Time

“[There are] many details that LoBianco includes in the latest book that tries to answer the question of who is Mike Pence – and why the devout Christian has entwined himself with Trump.” — USA Today

“In his evenhanded debut book, the author…allows the facts to speak for themselves. …A useful portrait of an enigmatic politician.” — Kirkus Reviews

“Like Bob Woodward of the Washington Post, [LoBianco is] good at getting people to talk. … LoBianco has come up with the best detailed treatment of Pence in the context of Indiana politics.” — Indianapolis Star