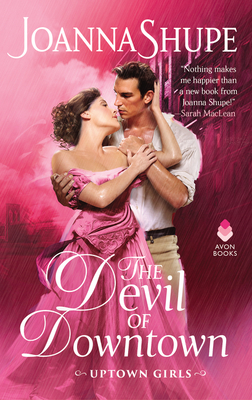 This is book number 3 in the Uptown Girls series.

“Nothing makes me happier than a new book from Joanna Shupe!”—Sarah MacLean

The final novel in Joanna Shupe's critically acclaimed Uptown Girl series about a beauitful do-gooder who must decide if she can team up with one of New York's brashest criminals without losing something irreplaceable: her heart.

He’s built a wall around his heart…

Orphaned and abandoned on the Bowery’s mean streets, Jack Mulligan survived on strength, cunning, and ambition. Now he rules his territory better than any politician or copper ever could. He didn’t get here by being soft. But in uptown do-gooder Justine Greene—the very definition of an iron fist in a velvet glove—Jack may have met his match.

She wears hers on her sleeve…

Justine is devoted to tracking down deadbeat husbands and fighting for fair working conditions. When her mission brings her face-to-face with Jack, she’s shocked to find the man behind the criminal empire is considerably more charming and honorable than many “gentlemen” she knows.

Forming an unlikely alliance, they discover an unexpected desire. And when Justine’s past catches up with them, Jack may be her only hope of survival. Is she ready to make a deal with the devil…?

Joanna Shupe has always loved history, ever since she saw her first Schoolhouse Rock cartoon. In 2013, she won Romance Writers of America's prestigious Golden Heart® Award for Best Historical. Since then, her books have appeared on numerous yearly &#8220best of” lists, including Publishers Weekly, The Washington Post, Kirkus Reviews, Kobo and BookPage. She lives in New Jersey with her two spirited daughters and dashing husband.  >