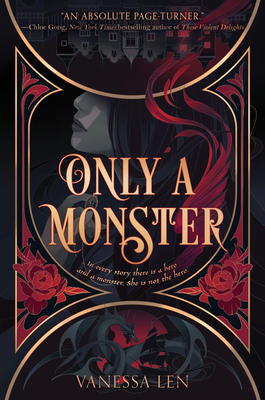 This is book number 1 in the Only a Monster series.

The sweeping romance of Passenger meets the dark fantasy edge of This Savage Song in this stunning contemporary fantasy debut from Vanessa Len, where the line between monster and hero is razor thin.

Don’t forget the rule. No one can know what you are. What we are. You must never tell anyone about monsters.

Joan has just learned the truth: her family are monsters, with terrifying, hidden powers.

And the cute boy at work isn’t just a boy: he’s a legendary monster slayer, who will do anything to destroy her family.

To save herself and her family, Joan will have to do what she fears most: embrace her own monstrousness. Because in this story…she is not the hero.

Dive deep into the world of Only a Monster: hidden worlds dwell in the shadows, beautiful monsters with untold powers walk among humans, and secrets are the most powerful weapon of all.

Vanessa Len writes YA fantasy about girl anti-heroes, monsters, and enemies who are maybe in love. She’s read every Diana Wynne Jones book more times than she can count. She’s a graduate of the Clarion Writers’ Workshop, and she lives in Melbourne, Australia. Only a Monster is Vanessa’s first novel, and you can visit her online at www.vanessalen.com.

“This book grabbed me by the throat. Vanessa Len’s world of monsters and heroes is like nothing I’ve ever read, utterly fresh and unique. Put down everything you’re doing, and read it!” — CS Pacat, USA Today bestselling author of the Captive Prince trilogy, and the Dark Rise series.

Mind-bending, heart wrenching, and unputdownable! Don’t feel bad if this book tricks you into rooting for the monster instead of the hero. Vanessa Len has written a masterful debut novel—I loved the time-travel, the star crossed romance, and the monsters.  — Stephanie Garber, New York Times bestselling author of the Caraval series

An absolute page-turner. Only a Monster paints another vivid world inside the one we know, and uses a deft hand to bring it utterly alive. Vanessa Len blurs the age-old lines between good or evil, hero or monster, in the most captivating way. — Chloe Gong, New York Times bestselling author of These Violent Delights

What a fantastic, immersive read – I couldn’t stop turning the page! An exciting, original and complex fantasy about monsters, heroes, and all the people in between.   — Naomi Novik, New York Times bestselling author of the Temeraire series

“Equal parts fantasy, adventure, and caper… Unique plotlines and characterization will have readers rooting for the monster; this is a must purchase.” — School Library Journal (starred review)

“A fast-paced thriller that blurs the division between villain and hero and features a deeply conflicted protagonist caught in the middle… an exciting urban fantasy.” — Kirkus Reviews

"Vanessa Len’s Only a Monster is captivating and unique and – dare I say it – utterly monstrous (in the best possible way). This engrossing debut will have YA readers longing to steal time just so they can devour the pages over and over again!" — Lynette Noni, author of The Prison Healer

"Only A Monster is a wonderfully clever and intriguing take on the classic tale of hero versus monster. Vanessa Len has crafted a rich and immersive world filled with unique magic, thrilling action, and a heart-wrenching star-crossed romance. A marvelous and twisty debut that will pull you in right from the start!" — June CL Tan, author of Jade Fire Gold

"Exquisitely crafted, this riveting read opens up a multitude of dimensions and turns the notion of heroes and monsters on its head. Vanessa Len has woven a spellbinding tale laced with mystery, magic, humor, and heartbreak." — Cindy Lin, author of The Twelve