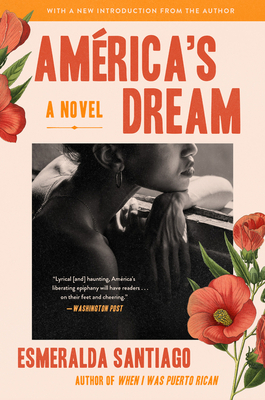 By Esmeralda Santiago
$16.99
On Our Shelves Now

"Lyrical [and] haunting, América’s liberating epiphany will have readers . . . on their feet and cheering." — Washington Post

Deftly written and fiercely resilient, América’s Dream explores the ever-shifting definition of what it means to be American and exemplifies the spirit of every immigrant who has dared to realize the American dream.

América Gonzalez is a hotel housekeeper on Vieques, an island off the coast of Puerto Rico, cleaning up after wealthy foreigners who don’t look her in the eye. Her alcoholic mother resents her; her married boyfriend, Correa, beats her; and their fourteen-year-old daughter thinks life would be better anywhere but with América. So when América is offered the chance to work as a live-in housekeeper and nanny for a family in Westchester, New York, she takes it as a sign to finally make the escape she's been longing for.

Yet, even as América revels in the comparative luxury of her new life—daring to care about a man other than Correa—she is faced with the disquieting realization that no matter what she does, she can never really escape her past.

Esmeralda Santiago is the author of three groundbreaking memoirs: When I was Puerto Rican, Almost a Woman (which she adapted into a Peabody Award–winning movie for PBS Masterpiece), and The Turkish Lover. Her fiction includes the novels América's Dream (also made into a film) and Conquistadora, and a children's book, A Doll for Navidades. Esmeralda is passionate about the artistic development of young people and has traveled the world as a public speaker encouraging literacy, memoir writing, and storytelling. Her books have been translated into fifteen languages.

“I wish I could write like Esmeralda Santiago! Read this book; be inspired.”
— Terry McMillan, #1 New York Times bestselling author of Waiting to Exhale and How Stella Got Her Groove Back

“Santiago has with this novel firmly established herself as one of the most powerful new voices in American fiction.”
— Boston Globe

"Lyrical [and] haunting, América’s liberating epiphany will have readers . . . on their feet and cheering."
— Washington Post