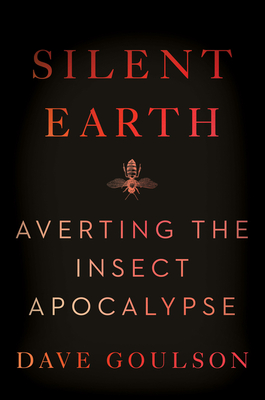 “A terrific book…A thoughtful explanation of how the dramatic decline of insect species and numbers poses a dire threat to all life on earth.” (Booklist, Starred Review)

In the tradition of Rachel Carson’s groundbreaking environmental classic Silent Spring, an award-winning entomologist and conservationist explains the importance of insects to our survival, and offers a clarion call to avoid a looming ecological disaster of our own making.

Drawing on thirty years of research, Goulson has written an accessible, fascinating, and important book that examines the evidence of an alarming drop in insect numbers around the world. “If we lose the insects, then everything is going to collapse,” he warned in a recent interview in the New York Times—beginning with humans’ food supply. The main cause of this decrease in insect populations is the indiscriminate use of chemical pesticides. Hence, Silent Earth’s nod to Rachel Carson’s classic Silent Spring which, when published in 1962, led to the global banning of DDT. This was a huge victory for science and ecological health at the time.

Yet before long, new pesticides just as lethal as DDT were introduced, and today, humanity finds itself on the brink of a new crisis. What will happen when the bugs are all gone? Goulson explores the intrinsic connection between climate change, nature, wildlife, and the shrinking biodiversity and analyzes the harmful impact for the earth and its inhabitants.

Meanwhile we have all read stories about hive collapse syndrome affecting honeybee colonies and the tragic decline of monarch butterflies in North America, and more. But it is not too late to arrest this decline, and Silent Earth should be the clarion call. Smart, eye-opening, and essential, Silent Earth is a forceful call to action to save our world, and ultimately, ourselves.

Dave Goulson is Professor of Biology at University of Sussex. He has published more than 300 scientific articles on the ecology and conservation of bumblebees and other insects. His books include the Sunday Times bestsellers, The Garden Jungle and A Sting in the Tale, which was also shortlisted for the Samuel Johnson prize and has been translated into fifteen languages. He is a Fellow of the Royal Entomological Society, a trustee of Pesticide Action Network, and an Ambassador for the UK Wildlife Trusts.

“Goulson's book is not only enormously informative, but also hugely entertaining: its light touch and constant humor make cutting-edge research a pleasure to read about. For anyone interested in the natural world, this is essential reading.”  — Independent (London)

“A terrific book…A thoughtful explanation of how the dramatic decline of insect species and numbers poses a dire threat to all life on earth.” — Booklist (Starred Review)

"An attempt to educate us in the eccentric beauty of insects and their absolute necessity." — Sunday Times (London)

“The book’s greatest strength is its insistence that change is possible, and that everyone can make it happen in small and large ways. Goulson steps seamlessly between knowledgeable professor and impassioned environmentalist, and you can’t help but get on board.” — Sierra Magazine

“An intense cri de coeur for saving insects…The question now is whether they can survive what humans have done to the earth.” — Times Literary Supplement (London)