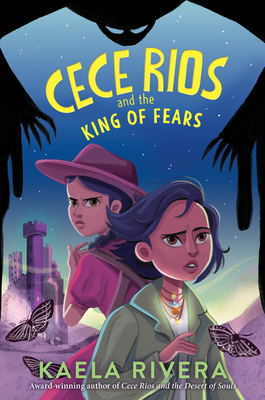 This is book number 2 in the Cece Rios series.

In this thrilling sequel to the “spellbinding” (Booklist starred review) and “mesmerizing” (Publishers Weekly starred review) middle grade fantasy adventure Cece Rios and the Desert of Souls, Cece and her sister Juana must journey into the stronghold of Devil’s Alley to challenge the criatura king El Cucuy.

Cece Rios thought saving her sister would be the end of her adventures in the world of criaturas. But part of Juana’s soul is still trapped in Devil’s Alley. As Cece tries to find a way to get it back using her new curandera abilities, Juana takes her fate in her own hands and sets off alone, intent on restoring her soul and getting revenge on El Sombrerón.

But then they discover that El Cucuy, king of the criaturas, is hunting for Cece, craving her powers for his own dark purposes. Can the Rios sisters—along with Coyote, Little Lion, and their other criatura allies—uncover his secrets and reclaim Juana’s soul? Or will the sinister forces of Devil’s Alley overcome them all?

This award-winning series is perfect for fans of Aru Shah and the End of Time and Amari and the Night Brothers.

Kaela Rivera was raised to believe in will-o’-the-wisps and el chupacabra, but even scary stories couldn’t stop her from reading in the isolated treetops, caves, and creeks of Tennessee’s Appalachian forests.

She still believes in the folktales of her Mexican-American and British parents, but now she writes about them from the adventure-filled mountains of the Wild West. When she’s not crafting stories, she’s using her English degree from BYU-I as an editor for a marketing company (or secretly doodling her characters in the margins of her notebook).

Her biggest hope is to highlight and explore the beauty of cultural differences—and how sharing those differences can bring us all closer.

"With strong ties to Mesoamerican lore and culture, the story hits the sweet spot between dark and light. Lively, endearing, and full of character." — Kirkus Reviews (starred review)

"Intertwined with rich Mexican folklore and culturally infused language, this is a brilliantly unveiled coming-of-age story not for the faint of heart.... Courage, determination, and unwavering love are the foundation of this debut." — School Library Journal

"...Packed with magic, adventure, friendship, and Latinx-inspired mythology... [Readers] will delight in exploring Cece’s world." — Bulletin of the Center for Children’s Books

"With distinct voices for the human and supernatural characters, Guerra’s narration enhances the magical realism of the mythological fantasy. Listeners will be cheering for the endearing heroine to prove herself and rescue her sister." — Booklist

"Flush with incredible worldbuilding, mucho español throughout, and an unforgettable cast, this book reminds us that our greatest strengths can sometimes be found in the unlikeliest of places." — Pablo Cartaya, award-winning author of The Epic Fail of Arturo Zamora

"Pokemon meets Coco in a spirited and moving adventure, at once familiar and tantalizingly strange, peopled by beautifully crafted and vivid characters." — David Bowles, award-winning author of They Call Me Güero