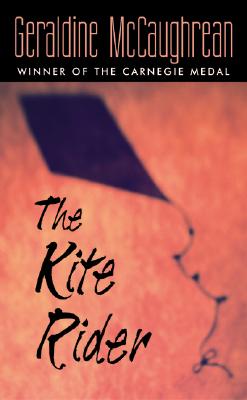 Geraldine McCaughrean—two-time Carnegie Medalist for Where the World Ends and Pack of Lies—delivers a dazzling story of adventure, betrayal, family, and sacrifice set in the dramatic, dangerous world of thirteenth-century China. “A genuine page-turner,” raved ALA Booklist in a starred review!

The Great Miao, master of the Jade Circus, offers twelve-year-old Haoyou the amazing chance to change his life—to escape from his family’s poverty and the pain of his father’s recent death—by becoming a kite rider!

Strapped onto a beautiful scarlet-and-gold kite, Haoyou is sent into the sky to soar perilously among the clouds and entertain awestruck crowds below. Traveling the Empire with the circus, Haoyou earns freedom, money, and unexpected fame as he skillfully performs for local villagers who believe he can bring back messages from lost loved ones whose spirits haunt the sky.

The Great Miao even plans for the boy to perform before the Mongol conqueror Kublai Khan himself! But what if the Miao isn’t all that he seems? And can Haoyou really leave behind all the duties that bind him to the ground—his family and especially his widowed mother—for good?

Geraldine McCaughrean is the Printz Award-winning author of The White Darkness. She has been honored with England's most prestigious children's book award, the Carnegie Medal, and is the only three-time winner ever of the Whitbread Children's Book Award. She also wrote Peter Pan in Scarlet, the first official sequel to the treasured masterpiece Peter Pan, and the critically acclaimed The Death-Defying Pepper Roux. Geraldine lives in Berkshire, England, with her husband and actress daughter.

“A marvelous, soaring story that gives you a glimpse into another world.” — The Guardian (London)