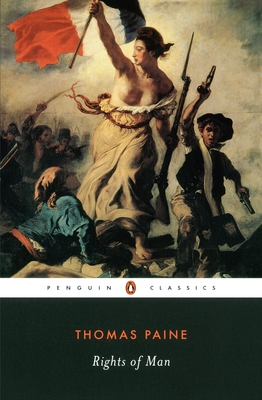 One of the great classics on democracy, Rights of Man was published in England in 1791 as a vindication of the French Revolution and a critique of the British system of government. In direct, forceful prose, Paine defends popular rights, national independence, revolutionary war, and economic growth—all considered dangerous and even seditious issues. In his introduction Eric Foner presents an overview of Paine's career as political theorist and pamphleteer, and supplies essential background material to Rights of Man. He discusses how Paine created a language of modern politics that brought important issues to the common man and the working classes and assesses the debt owed to Paine by the American and British radical traditions.

Thomas Paine was born in Thetford, England, in 1737, the son of a staymaker. He had little schooling and worked at a number of jobs, including tax collector, a position he lost for agitating for an increase in excisemen’s pay. Persuaded by Benjamin Franklin, he emigrated to America in 1774. In 1776 he began his American Crisis series of thirteen pamphlets, and also published the incalculably influential Common Sense, which established Paine not only as a truly revolutionary thinker, but as the American Revolution’s fiercest political theorist. In 1787 Paine returned to Europe, where he became involved in revolutionary politics. In England his books were burned by the public hangman. Escaping to France, Paine took part in drafting the French constitution and voted against the king’s execution. He was imprisoned for a year and narrowly missed execution himself. In 1802 he returned to America and lived in New York State, poor, ill and largely despised for his extremism and so-called atheism (he was in fact a deist). Thomas Paine died in 1809. His body was exhumed by William Cobbett, and the remains were taken to England for a memorial burial. Unfortunately, the remains were subsequently lost.

Eric Foner is the DeWitt Clinton Professor of History at Columbia University. A winner of the Great Teacher Award from the Society of Columbia Graduates, Foner is an elected member of the American Academy of Arts and Sciences and of the British Academy. He has served terms as President of both the American Historical Association and the Organization of American Historians.