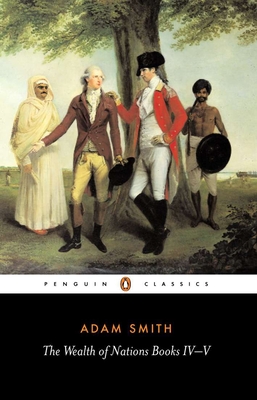 With this landmark treatise on political economy, Adam Smith paved the way for modern capitalism, arguing that a truly free market – fired by competition yet guided as if by an ‘invisible hand’ to ensure justice and equality  – was the engine of a fair and productive society. In Books IV-V, Smith offers his considered response to the French Physiocrats and assesses the nature of the mercantile system.

The Wealth of Nations (Books I-III) are also published in Penguin Classics.

Adam Smith (1723-90) was born in Glasgow and educated at Glasgow and Oxford.  Two years after his return to Scotland, Smith moved to Edinburgh, where he delivered lectures on Rhetoric. In 1751 Smith was appointed Professor of Logic at Glasgow, but was translated to chair of Moral Philosophy in 1752. His The Theory of Moral Sentiments was published in 1759 and The Wealth of Nations in 1776, the same year as the Declaration of Indpendence.

Andrew Skinner teaches at the Adam Smith Institute and is an expert on the author's work.