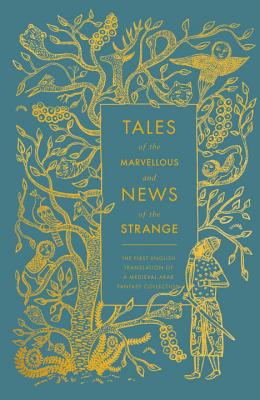 This collection of previously untranslated Arabic stories, dating back a millennium or more, is a must-have for anyone obsessed with folktales or mythology. Beautifully translated, these stories share tales of princes and monsters, fortunes won and lost, transmogrification, and so much more. Even the most well-read fairy-tale fiend will find something new in the difference of style and telling, and the rich, cultural history of the tales.

A great cache of ancient, magical stories in the same tradition as The Arabian Nights, Tales of the Marvellous and News of the Strange is an extraordinary find. Dating from at least a millennium ago, these are the earliest-known Arabic short stories, which survived in a single, ragged manuscript in a library in Istanbul. Some found their way into The Arabian Nights, but most have never been read in English before. Composed to fascinate their original audiences, these charming, surreal, baffling, and beautiful stories are indeed both marvelous and strange.

The names of the original authors of the tales are long lost. Malcolm C. Lyons is also the translator of the Penguin Classics edition of the complete Arabian Nights. He was Sir Thomas Adams Professor of Arabic at Cambridge University and is a life fellow of Pembroke College, Cambridge. He is one of the world's leading experts on classical Arabic literature. Robert Irwin's books include For Lust of Knowing: The Orientalists and Their Enemies, The Middle East in the Middle Ages, The Arabian Nights: A Companion and (as editor) The Penguin Anthology of Classical Arabian Literature. He also introduced and edited the Penguin Classics Arabian Nights.

“It's hard to imagine shaking off the dust of this thousand-year-old volume of stories (recently discovered in an Istanbul library) and seeing them for the first time. As thoughtful as they are wondrous, these tales run the gamut: epic and domestic, charming and chilling, realistic and magical, with prose like a jewel box. If it looks scholarly at first glance, take heart; by the time God folds up the desert to help a lost heroine find her way across a strange land, this collection will have made itself at home in your imagination.”
—NPR, "Guide To 2015’s Great Reads"

"A revelation—a real classic of popular literature, so fluent that it is not just addictive reading but a genuine pleasure to sit down and lose yourself."
—Sunday Times

"Offers a gateway to a different world of language and ideas, florid, wildly descriptive and are a powerful reminder of the human need for story . . . irresistible."
—The Independent

"This book is an astonishment . . . a profound oddity, but an absolutely intriguing one."
—Scotland on Sunday

"Instantly appealing [with] headlong narrative drive . . . above all, fun."
—The Guardian

"Lyons’s translation is fluent and entertaining...Coupled with an informative introduction by ­Robert Irwin, author of The Arabian Nights: A Companion, this book is a welcome and recommended addition to those who enjoy the Arabian Nights.
—Library Journal
My Account • Sign In • Sign Out • Register
NEW & USED BOOKS
AUTHOR EVENTS • GIFTS
Tempe
6428 South McClintock Drive
480.730.0205
[Google Map]
10am-7pm daily