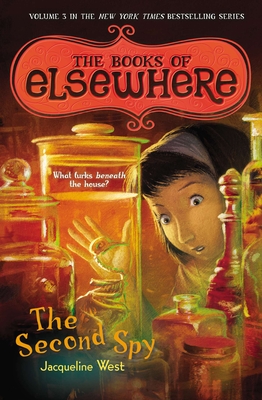 This is book number 3 in the The Books of Elsewhere series.

“The Books of Elsewhere series continues to delight. In her third outing, Olive faces dread on two fronts: Annabelle McMartin continues to haunt her, and she's starting middle school. When she and her allies begin keeping secrets from one another, it makes it hard to know whom to trust. Olive may have painted herself into a corner in more than one way in this latest art-infused thriller.”
— Rosemary Pugliese, Quail Ridge Books, Raleigh, NC

In Olive's third adventure in the New York Times bestselling Books of Elsewhere series, what lurks below the house could be as dangerous as what's hidden inside . . .

Some terrifying things have happened to Olive in the old stone house, but none as scary as starting junior high. Or so she thinks. When she plummets through a hole in her backyard, though, Olive realizes two things that may change her mind: First, the wicked Annabelle McMartin is back. Second, there's a secret below-ground that unlocks not one but two of Elsewhere's biggest, most powerful, most dangerous forces yet. But with the house's magical cats acting suspicious, her best friend threatening to move away, and her ally Morton starting to rebel, Olive isn't sure where to turn. Will she figure the mystery out in time? Or will she be lured into Elsewhere . . . and trapped there for good?

A two-time Pushcart nominee for poetry, Jacqueline West (www.jacquelinewest.com) came to writing by way of opera (she studied vocal performance) and acting (she worked as an actress at a dinner theatre while earning her degree). Looking back on it, it's hard for Jacqueline to believe she ever wanted to be an opera singer, but singing, acting, and writing have one thing in common, she says: "They're all about telling a story, about getting inside the mind of someone other than yourself." The Books of Elsewhere were inspired by a strange old house in Jacqueline's home town--three floors, cracking paint, sagging porches--that was owned by a professor who created all sorts of odd contraptions. Like lots of kids who live mostly in their imaginations, Jacqueline was obsessed with all things mysterious, creepy, and darkly funny, and with stories where magic intersects with everyday life. She was enthralled by Roald Dahl, Lewis Carroll, John Bellairs, Mrs. Frisby and the Rats of Nimh, Calvin and Hobbes, Bunnicula, etc. Jacqueline lives with her husband and their dog, Brom Bones (of Sleepy Hollow fame).

“A fantastic story full of magic and mysteries.”—San Francisco Chronicle on The Shadows “This is a great . . . read that will let your imagination run wild.”—TIME for Kids on The Shadows