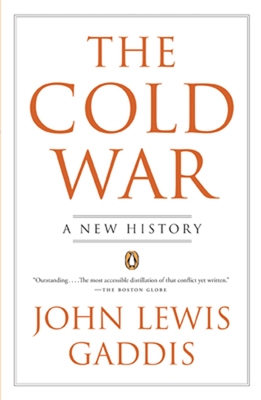 “Outstanding . . . The most accessible distillation of that conflict yet written.” —The Boston Globe

“Energetically written and lucid, it makes an ideal introduction to the subject.” —The New York Times

The “dean of Cold War historians” (The New York Times) now presents the definitive account of the global confrontation that dominated the last half of the twentieth century. Drawing on newly opened archives and the reminiscences of the major players, John Lewis Gaddis explains not just what happened but why—from the months in 1945 when the U.S. and the U.S.S.R. went from alliance to antagonism to the barely averted holocaust of the Cuban Missile Crisis to the maneuvers of Nixon and Mao, Reagan and Gorbachev. Brilliant, accessible, almost Shakespearean in its drama, The Cold War stands as a triumphant summation of the era that, more than any other, shaped our own.

Gaddis is also the author of On Grand Strategy.

John Lewis Gaddis is the Robert A. Lovett Professor of History of Yale University. He is the author of numerous books, including On Grand Strategy, The United States and the Origins of the Cold War, 1941-1947 (1972); Strategies of Containment: A Critical Appraisal of Postwar American National Security (1982); The Long Peace: Inquiries into the History of the Cold War (1987); We Now Know: Rethinking Cold War History (1997); The Landscape of History: How Historians Map the Past (2002); and Surprise, Security, and the American Experience (2004).

“Outstanding . . . The most accessible distillation of that conflict yet written.” —The Boston Globe

“Energetically written and lucid, it makes an ideal introduction to the subject.” —The New York Times

“A fresh and admirably concise history . . . Gaddis’s mastery of the material, his fluent style and eye for the telling anecdote make his new work a pleasure.” —The Economist