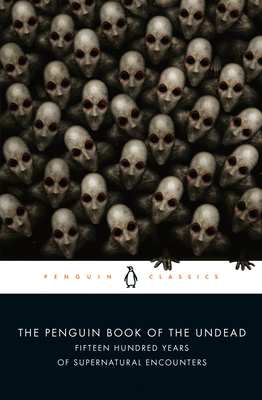 The walking dead from 15 centuries haunt this compendium of ghostly visitations through the ages, exploring the history of our fascination with zombies and other restless souls.

Since ancient times, accounts of supernatural activity have mystified us. Ghost stories as we know them did not develop until the late nineteenth century, but the restless dead haunted the premodern imagination in many forms, as recorded in historical narratives, theological texts, and personal letters. The Penguin Book of the Undead teems with roving hordes of dead warriors, corpses trailed by packs of barking dogs, moaning phantoms haunting deserted ruins, evil spirits emerging from burning carcasses in the form of crows, and zombies with pestilential breath. Spanning from the Hebrew scriptures to the Roman Empire, the Scandinavian sagas to medieval Europe, the Protestant Reformation to the Renaissance, this beguiling array of accounts charts our relationship with spirits and apparitions, wraiths and demons over fifteen hundred years, showing the evolution in our thinking about the ability of dead souls to return to the realm of the living—and to warn us about what awaits us in the afterlife.

Scott G. Bruce (editor) is the editor of The Penguin Book of Hell and the author of three books about the abbey of Cluny. He is a professor of history at Fordham University in New York City. He worked his way through college as a grave digger.

“The scariest stories you’ll read this Halloween were written 1,000 years ago. This wonderfully fun and creepy anthology, lovingly curated by Scott Bruce, . . . is ideal for anyone fond of zombies, ghosts, ghouls, ancient horrors, and dread warnings from beyond the grave. . . . Along with Penguin’s Book of Ghost Stories and Book of Witches, it completes a sort of trilogy of spookiness that is wickedly entertaining, accessible, and surprisingly informative.” —The Philadelphia Inquirer

"A marvelous treasury of ghostdom. It’s exactly what I wanted to read. Scott Bruce has done a great job of assembling these accounts of the uncanny, and I know I shall keep it close by my bed for a long time." —Philip Pullman, #1 New York Times bestselling author of The Golden Compass

“This exceptionally well-curated compilation shows that the wide variety of accounts of the undead have been rampant in literature long before the Gothic era. . . . Bruce has chosen selections from numerous cultures, including ancient Greece, Anglo-Norman England, and medieval Scandinavia. . . . He presents the contents with an enthusiasm that makes these . . . works accessible to the casual reader.” —Publishers Weekly

“It succeeds well as an education in how stories of wandering spirits have reflected throughout history common human anxieties about death, the disposal of mortal remains, and the fate of the soul [and] how these fears have changed through the ages and the ways in which otherworldly accounts have been used to address them.” —Library Journal