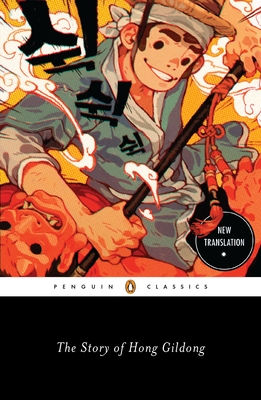 A new, definitive translation of the quintessential Korean classic: the Robin Hood story of a magical boy who joins a group of robber bandits and becomes a king

The Story of Hong Gildong is arguably the single most important work of classic Korean fiction. A fantastic story of adventure, it has been adapted into countless movies, television shows, novels, and comics in Korea. Until now, the earliest and fullest text of this incredible fable has been inaccessible to English readers.

Hong Gildong, the brilliant but illegitimate son of a noble government minister, cannot advance in society due to his second-class status, so he leaves home and becomes the leader of a band of outlaws. On the way to building his own empire and gaining acceptance from his family, Hong Gildong vanquishes assassins, battles monsters, and conquers kingdoms. Minsoo Kang’s expressive and lively new translation finally makes the authoritative text of this premodern tale available in English, reintroducing a noble and righteous outlaw and sharing a beloved hallmark of Korean culture.

"Hong Gildong is an iconic figure in the Korean literary canon...He's the mythic center of a sometimes-delightful, sometimes-unsettling tale, and it's time the Western world gets to know him." —NPR

"[A] marvel-filled swashbuckler...Besides being half fairy tale, half social protest novel, The Story of Hong Gildong possesses a profound resonance for modern Koreans." —Michael Dirda, The Washington Post

Minsoo Kang is an associate professor of European history at University of Missouri-St. Louis. He is the author of Sublime Dreams of Living Machines: The Automaton in the European Imagination and coeditor of Visions of the Industrial Age, 1830–1914: Modernity and the Anxiety of Representation in Europe. He is also the author of a short story collection, Of Tales and Enigmas.

"Hong Gildong is an iconic figure in the Korean literary canon...He's the mythic center of a sometimes-delightful, sometimes-unsettling tale, and it's time the Western world gets to know him...The edition Kang has delivered is a chewy one, combining historical context and the archness of myth with wry personality."
—NPR

“Minsoo Kang’s long-anticipated and eminently readable translation of this Korean classic, with his incisive introduction, makes this edition of Hong Gildong indispensable for both casual readers and scholars of Korean literature.”
—Heinz Insu Fenkl

"[An] engaging, essential tale."
-Publisher's Weekly,"Pick of the Week"

"Wonderfully complex, rich with moral questions, and an easy read, like a fairy tale."
-Asymptote

"If you read only one book about Korean heroic outlaws this season, this should be the one."
-Kirkus

"For such a slim volume, The Story of Hong Gildong has an incredible array of implications for scholars of history, Korean literary history, and even contemporary political life...[Kang's] engagement with the radical contours that would spread to East Asia in the late 19th and early 20th centuries brings a welcome critical eye to a story that deserves to be cherished as a massively influential piece of fiction, but maybe not as a blueprint for a new world."
-Asian Review