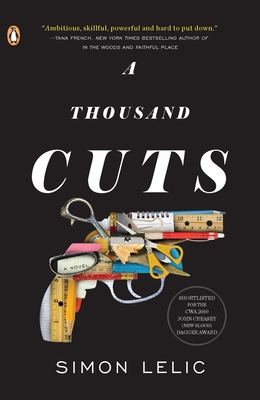 Even with disturbing tales of student suicides evoked by ruthless bullying screaming from recent headlines, few of us are willing to delve into the unremarkable daily tortures behind the spectacle. Lelic brings the issue of bullying—in the school and in workplace, by children and adults—home with his unsettling, penetrating debut novel. Through his protagonist, police investigator Lucia, he asks, “Why was the onus always on the weak when it was the strong who had a liberty to act? Why were the weak obliged to be so brave when the strong had license to behave like such cowards?” His characters are unremarkable and average—which makes their inaction, their cruelty, all the more chilling. Through cutting prose, he masterfully evokes the gut-wrenching betrayal that bullying victims feel when their cries for help go unanswered, and authority tacitly endorse, or even encourage, unspeakable barbarism. A Thousand Cuts leaves you with the disquieting question: what do we cause when we scorn the weak and plea ignorance in the face of cruelty?

“Simon Lelic introduces a wonderful character, London Det. Inspector Lucia May, in this outstanding debut. In what should be a cut- and-dry murder case, May instead pushes further and deeper, uncovering secrets at all levels. All the characters are fully drawn, and even the murderer is sympathetically portrayed in this deep, and deeply human, examination of responsibility. That said, this is also a fast-paced page turner, with pitch-perfect dialog and characters you long to meet again.”
— Leslie Reiner, Inkwood Books, Tampa, FL

"In his powerful, wrenching debut, Lelic takes a sadly familiar crime and delves into the equally familiar menace at its root: bullying." -People

In this riveting debut novel about sexism, bullying, and the horrific effects of random acts of violence, Detective Inspector Lucia May investigates a school shooting in which a teacher has killed three pupils, another teacher, and then himself-a tragedy that could not have been predicted. It should be an openand- shut case. Yet as Lucia begins to piece together the testimonies of the various witnesses, an uglier and more complex picture emerges, calling into question the innocence of others. Brilliantly interweaving the witnesses' accounts with Lucia's own perspective, A Thousand Cuts is a narrative tour de force from a formidable new voice in fiction.

Simon Lelic has worked as a journalist and currently runs his own business. He was born in Brighton, England in 1976 and lives there now with his wife and two sons. This is his first novel.