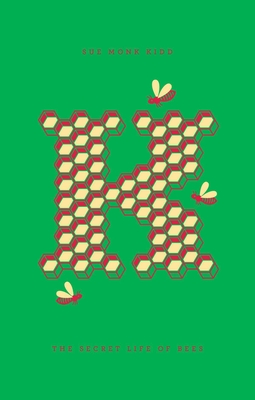 It all begins with a letter. Fall in love with Penguin Drop Caps, a new series of twenty-six collectible and hardcover editions, each with a type cover showcasing a gorgeously illustrated letter of the alphabet. In a design collaboration between Jessica Hische and Penguin Art Director Paul Buckley, the series features unique cover art by Hische, a superstar in the world of type design and illustration, whose work has appeared everywhere from Tiffany & Co. to Wes Anderson's recent film Moonrise Kingdom to Penguin's own bestsellers Committed and Rules of Civility. With exclusive designs that have never before appeared on Hische's hugely popular Daily Drop Cap blog, the Penguin Drop Caps series launches with six perennial favorites to give as elegant gifts, or to showcase on your own shelves.

K is for Kidd. Set in South Carolina during the tumultuous summer of 1964, The Secret Life of Bees also ushered young Lily Owens, a girl transformed by the power and divinity of the female spirit, into the canon of modern-day heroines. Lily and her fierce-hearted black “stand-in mother” escape the racism of their hometown and find refuge with an eccentric trio of black beekeeping sisters, whose world of bees, honey, and the Black Madonna is mesmerizing.

Sue Monk Kidd is the award-winning and bestselling author of the novels The Secret Life of Bees and The Mermaid Chair, the memoirs When the Heart Waits, The Dance of the Dissident, and Traveling with Pomegranates, which she wrote with her daughter Ann Kidd Taylor, as well as Firstlight, a collection of her early writings. She lives on an island off the coast of Florida with her husband.

Jessica Hische is a letterer, illustrator, typographer, and web designer. She currently serves on the Type Directors Club board of directors, has been named a Forbes Magazine "30 under 30" in art and design as well as an ADC Young Gun and one of Print Magazine’s "New Visual Artists". She has designed for Wes Anderson, McSweeney's, Tiffany & Co, Penguin Books and many others. She resides primarily in San Francisco, occasionally in Brooklyn.