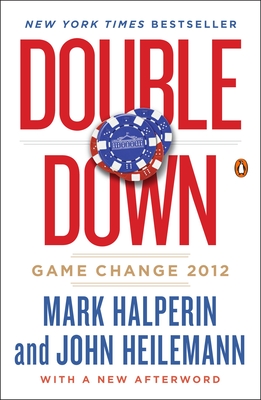 Michiko Kakutani, The New York Times:
"Those hungry for political news will read Double Down for the scooplets and insidery glimpses it serves up about the two campaigns, and the clues it offers about the positioning already going on among Republicans and Democrats for 2016 ... The book testifies to its authors’ energetic legwork and insider access... creating a novelistic narrative that provides a you-are-there immediacy... They succeed in taking readers interested in the backstabbing and backstage maneuvering of the 2012 campaign behind the curtains, providing a tactile... sense of what it looked like from the inside."

In their runaway bestseller Game Change, Mark Halperin and John Heilemann captured the full drama of Barack Obama’s improbable, dazzling victory over the Clintons, John McCain, and Sarah Palin. With the same masterly reporting, unparalleled access, and narrative skill, Double Down picks up the story in the Oval Office, where the president is beset by crises both inherited and unforeseen—facing defiance from his political foes, disenchantment from the voters, disdain from the nation’s powerful money machers, and dysfunction within the West Wing. As 2012 looms, leaders of the Republican Party, salivating over Obama’s political fragility, see a chance to wrest back control of the White House—and the country. So how did the Republicans screw it up? How did Obama survive the onslaught of super PACs and defy the predictions of a one-term presidency? Double Down follows the gaudy carnival of GOP contenders—ambitious and flawed, famous and infamous, charismatic and cartoonish—as Mitt Romney, the straitlaced, can-do, gaffe-prone multimillionaire from Massachusetts, scraped and scratched his way to the nomination.

Double Down exposes blunders, scuffles, and machinations far beyond the klieg lights of the campaign trail: Obama storming out of a White House meeting with his high command after accusing them of betrayal. Romney’s mind-set as he made his controversial “47 percent” comments. The real reasons New Jersey governor Chris Christie was never going to be Mitt’s running mate. The intervention held by the president’s staff to rescue their boss from political self-destruction. The way the tense détente between Obama and Bill Clinton morphed into political gold. And the answer to one of the campaign’s great mysteries—how did Clint Eastwood end up performing Dada dinner theater at the Republican convention?

In Double Down, Mark Halperin and John Heilemann take the reader into back rooms and closed-door meetings, laying bare the secret history of the 2012 campaign for a panoramic account of an election that was as hard fought as it was lastingly consequential.

JOHN HEILEMANN is the national affairs editor for New York magazine and a political analyst for MSNBC. An award-winning journalist and author of Pride Before the Fall, he is a former staff writer for The New Yorker, Wired, and The Economist. He lives in Brooklyn.

Michiko Kakutani, The New York Times:
"Those hungry for political news will read Double Down for the scooplets and insidery glimpses it serves up about the two campaigns, and the clues it offers about the positioning already going on among Republicans and Democrats for 2016 ... The book testifies to its authors’ energetic legwork and insider access ... creating a novelistic narrative that provides a you-are-there immediacy ... They succeed in taking readers interested in the backstabbing and backstage maneuvering of the 2012 campaign behind the curtains, providing a tactile ... sense of what it looked like from the inside."

Michael Kinsley, The New York Times Book Review:
“Chock-full of anecdotes, secret meetings, indiscreet remarks ... No one can compete [with Halperin and Heilemann]. That’s what it means to own the franchise. It’s a small club: these two guys and Bob Woodward. And with this book, they’ve earned their admission.”

The Economist:
“Sharp insights buttressed by startling indiscretions fill Double Down, a new account of Barack Obama’s win over his 2012 Republican rival, Mitt Romney. This gripping book—a sequel to Game Change, a bestseller about Mr. Obama’s 2008 path to the White House—cements the status of the authors as unrivalled chroniclers of campaign politics.”

Jeff Labrecque, Entertainment Weekly:
“Journalists Halperin and Heilemann don’t lack for access, delivering another down-and-dirty account of an election that plays out like high-stakes high school cafeteria politics…. Double Down looks less like a sequel to 2008 than a tantalizing prequel to 2016. I’m all-in.”

Joe Scarborough, MSNBC/Morning Joe:
“Done it before, and have done it again.”

Charlie Rose:
“In many ways, an insight into America.”

Barbara Walters, ABC-TV/The View:
“Authors of the bestselling book turned Emmy-winning HBO movie Game Change are telling all in their latest book ... It is terrific.”

Mark Levin:
“This is a great read.”

Ezra Klein, The Washington Post:
“Double Down... is a joyous romp through the seedy underbelly of presidential campaigning....It’s also a marvel of reporting. Any time three staff members met in a room to badmouth a colleague or a candidate admitted to a moment of stress or self-doubt, ... John Heilemann and Mark Halperin appear to have been sitting in the corner, scribbling notes."

Lawrence O’Donnell, MSNBC’s The Last Word:
"I love this book.”

Dylan Byers, Politico:
“In an era when the most minute details of a presidential campaign are chronicled in endless tweets and seemingly instant eBooks they have published an old-fashioned print product filled with new revelations.”

Howard Kurtz, Fox News:
“You’d think there were no revelations left from the 2012 campaign, but Mark Halperin and John Heilemann, the Game Change duo, strike again in their new book.”