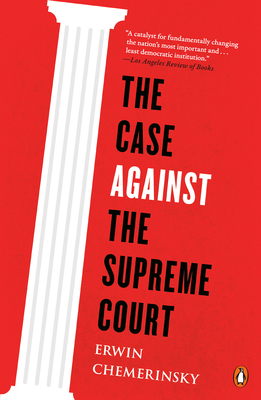 Both historically and in the present, the Supreme Court has largely been a failure

In this devastating book, Erwin Chemerinsky—“one of the shining lights of legal academia” (The New York Times)—shows how, case by case, for over two centuries, the hallowed Court has been far more likely to uphold government abuses of power than to stop them. Drawing on a wealth of rulings, some famous, others little known, he reviews the Supreme Court’s historic failures in key areas, including the refusal to protect minorities, the upholding of gender discrimination, and the neglect of the Constitution in times of crisis, from World War I through 9/11.

No one is better suited to make this case than Chemerinsky. He has studied, taught, and practiced constitutional law for thirty years and has argued before the Supreme Court. With passion and eloquence, Chemerinsky advocates reforms that could make the system work better, and he challenges us to think more critically about the nature of the Court and the fallible men and women who sit on it.

Erwin Chemerinsky is the founding dean, Distinguished Professor of Law, and Raymond Pryke Professor of First Amendment Law at the University of California, Irvine, School of Law. He has written for the New York Times, the Los Angeles Times, and the Boston Globe, among many other publications. He lives in Irvine, California.

“A catalyst for fundamentally changing the nation’s most important and . . . least democratic institution . . . A scholar with intellectual power, passion and pluck.”―Los Angeles Review of Books

"One of the shining lights of legal academia."―The New York Times

Praise for THE CONSERVATIVE ASSAULT ON THE CONSTITUTION

"Our Constitution depends on the courts to keep it alive; we all depend on Erwin Chemerinsky to remind us why that is so important. This book is essential reading for anyone who cares about preserving our constitutional birthright."--Susan N. Herman, Preseident, Amerian Civil Liberties Union

"Erwin Chemerinsky knows the Constitution as a legal scholar and the Supreme Court as a lawyer who represents clients there. It's a rare and poweful combination that makes him uniquely qualified to write this disturbing and persuasive book about the impact of the current Supreme Court's approach to constitutional interpretation."--Linda Greenhouse, lecturer, Yale Law School; former New York Times Supreme Court correspondent