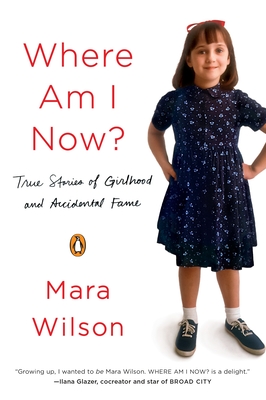 Matilda was one of my favorite movies growing up (and still is to this day, if we're being honest), so naturally, when I heard Mara Wilson was writing a book, I knew I had to read it. Where Am I Now doesn't disappoint and is far from your average Hollywood memoir. Tackling subjects from her time on various television and movie sets, to the death of her on-screen dad Robin Williams, to her diagnoses and life with OCD and depression, Wilson's writing is honest, sharp, and surprisingly relatable. I sincerely hope that we see more writing from Mara Wilson, and soon!

“Growing up, I wanted to be Mara Wilson. Where Am I Now? is a delight.” —Ilana Glazer, cocreator and star of Broad City

A former child actor best known for her starring roles in Matilda and Mrs. Doubtfire, Mara Wilson has always felt a little young and out of place: as the only kid on a film set full of adults, the first daughter in a house full of boys, a Valley girl in New York and a neurotic in California, and a grown-up the world still remembers as a little girl. Tackling everything from what she learned about sex on the set of Melrose Place, to discovering in adolescence that she was no longer “cute” enough for Hollywood, these essays chart her journey from accidental fame to relative (but happy) obscurity. They also illuminate universal struggles, like navigating love and loss, and figuring out who you are and where you belong. Candid, insightful, moving, and hilarious, Where Am I Now? introduces Mara Wilson as a brilliant new chronicler of the experience that is growing up female.

Mara Wilson is a writer, playwright, actor, and storyteller perhaps best known as the little girl from Mrs. Doubtfire, Miracle on 34th Street, and Matilda. A graduate of NYU’s Tisch School of the Arts, she regularly appears at live storytelling and comedy shows, including her own, What Are You Afraid Of?. Her writing can be found on Jezebel, The Toast, McSweeney’s, the Daily Beast, and Cracked.com, and on her blog, MaraWilsonWritesStuff.com. A voice actor on the podcast Welcome to Night Vale, she will guest star on upcoming episodes of Broad City and BoJack Horseman. She lives in New York City.

“Wilson's humorous literary voice tells the story of growing up as a young female in the spotlight (and eventually stepping out of it) and the road of self-acceptance, discovery and everything in between.” —BuzzFeed

"[Wilson] returns as a talented writer with this collection of essays." —Entertainment Weekly, "15 Books You Have to Read in September"

"Funny [and] insightful." —GoodReads, "Best Books of the Month"

"Wilson has left the acting (almost) completely behind — and moved on to become a talented writer and playwright." —Bustle,"12 Memoirs By Badass Women to Add To Your Wishlist in Fall 2016"

"Candid...witty and insightful. A-" —InTouch

"Contains engaging, poignant accounts of the actress-turned-storyteller's struggles to find her identity after losing her mother and Hollywood's adoration...Wilson covers difficult topics but can leaven a painful anecdote with incisive wit...When fans ask for a picture with her, she panics: 'I don't photograph well, and...they're going to put it on the Internet, where not everyone knows I'm funny and charming and generally a decent person.' And that's exactly how she comes across in this memoir." —ShelfAwareness

"Lyrical and affecting . . . humorous, relatable, and ultimately real. . .  [Where Am I Now?] is more than just another Hollywood memoir; it is a truly refreshing coming-of-age story." —Library Journal

"A heartfelt portrait . . . [Mara Wilson] has experienced a great many highs as well as lows in her young life, and she shares them all with honesty, humor, and humility." —Publishers Weekly

"A coming-of-age story that is not only entertaining, but also wise. . . . A readably candid, sharp memoir." —Kirkus Reviews

"Refreshingly earnest...If Where Am I Now? and its biting wit and charming self-awareness is anything to go by, [Wilson is] very easily running in the same league as the Lena Dunhams, Rachel Blooms and Ilana Glazers of the world." —National Post (Canada)

“Growing up, I wanted to BE Mara Wilson. I always loved that she portrayed strong characters, especially as a female, even as a young child. Where Am I Now? is a delight.”  —Ilana Glazer, co-creator and star of Broad City

“Genuine and authentic, funny and heartbreaking, Where Am I Now? is a book that reminds you that no matter how unique your life is, some things bind us all together.” —Jenny Lawson, author of Furiously Happy and Let’s Pretend this Never Happened

“Former child star Mara Wilson has grown up to be a moving, funny, and thoughtful storyteller. Well, not up. As I understand it, she's still approximately the same height.”  —Megan Amram, author of Science…for Her!

“You don't have to be a fellow neurotic Jew who grew up in Southern California to adore this book. Though Mara Wilson’s childhood was unique, the themes of Where Am I Now? are universal.”  —Rachel Bloom, creator and star of Crazy Ex-Girlfriend